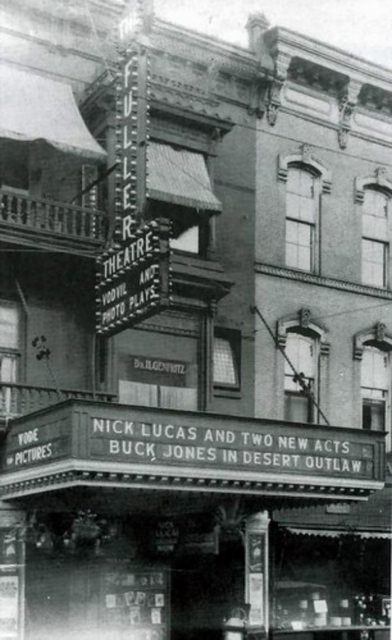 The Fuller Theatre was located on South Burdick just down from the large Woolworths store. The theatre opened in the 1920’s and closed in the 1960’s. The lobby of the old theatre now houses a retail shoe store. The auditorium has been demolished and is a parking lot.

According to the Kalamazoo Gazette, the Fuller opened as a stage house in 1909. Butterfield took over the house in 1929, and continued to operate until the theatre’s closure in 1953.

Street View has been updated to show the State Theatre, which is two blocks south of the Fuller’s site, and on the opposite side of the street. The Google Maps pin icon is in the wrong location, too, but it’s only one block too far south. The Fuller Theatre was just north of South Street.

There’s a lot of ambiguous and contradictory information about this theater on the Internet. I’ll post more about it if I can puzzle out its history from the fragments.

I finally found some unambiguous information about the Fuller Theatre. Here is a photo of the Fuller from the Kalamazoo Public Library. It appears to be from the late 1940s. The caption says that the Fuller operated from September 3, 1909, until March 29, 1953.

The page also has a lot plan of part of the block, showing the Fuller and an earlier theater it replaced, the Wonderland, with the address 143 Burdick (Kalamazoo renumbered its blocks sometime between 1915 and 1926, with the 100 block becoming the 200 block.)

This photo gallery, which is also from the Kalamazoo Public Library, shows the block of Burdick Street on which the Fuller was located at various dates from c1875 until 2005.

The Fuller’s entrance building was remodeled (or perhaps completely rebuilt) sometime between 1935 and the 1940s, and is still standing, but Google Satellite view shows that the auditorium has been replaced by a parking lot.