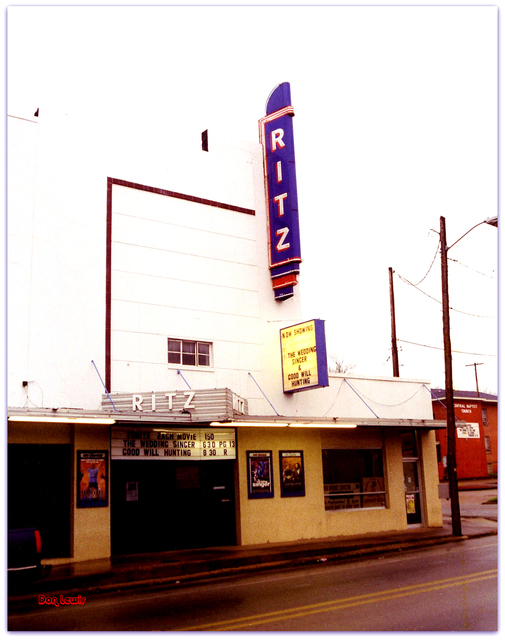 When I “discovered” the Ritz Theater several years ago, “Good Will Hunting” and “The Wedding Singer” were playing as a double feature.

It was in a fairly unremarkable building, but had a neat vertical, neon, royal blue sign, trimmed in red, with “Ritz” spelled out in white letters trimmed in red. It closed by early-2018.

Hey Bryan. Just wanted to say thanks for your posting of the Granada in Alpine. Because of that I visited the Texas Escapes website and was able to place towns with eleven separate theater photographs that I had all but given up on the locations.

By the way, the Granada was one of them along with the Texas in Kingsville.

A Double Feature! I remember those.

My photograph of the RITZ…… View link

The Ritz Theater is still open. The status should be updated. I took this picture 2/26/07. They were showing “Norbit.”

Here is another photo:
http://tinyurl.com/y3lpnug

From Crockett a photo of the Ritz Theater.

They are showing Star Wars EP7 every day through Jan 14 at 6:30pm. There is no online presence for the theater but you can get info via phone (936) 544-7099. They seat 342 people downstairs. The balcony is being used as their DCP projection booth.