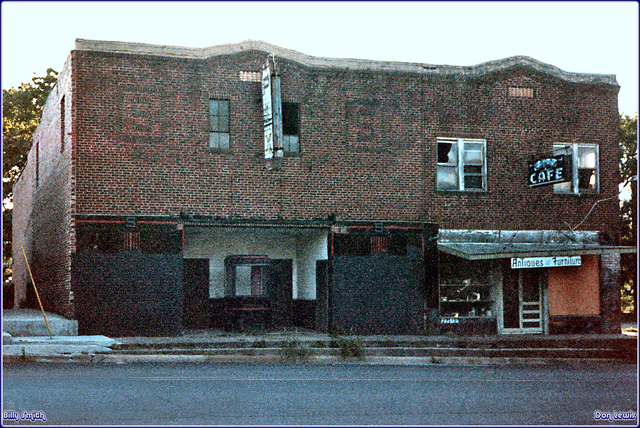 I discovered the Pix Theatre in Centerville which is just off of Interstate 45 a few years ago. It was a distinctive brick building with brown brick on the bottom half an a checkered mix of red and brown on the top half.

The box office was separate and sheltered by the typical type opening in the front of the building. The “Pix” sign was vertical and well worn. It became a church for a while. The Pix Theatre looked as if it had been closed for many years. Centerville was quiet and empty.

love to get inside that building…………….

Here is a larger picture of the church. The function should be changed accordingly:
http://tinyurl.com/2xy24v

Here is a 1986 photo of the Pix Theater showing an attached cafe and antique shop. The function should remain “closed theater” which is what it is, thank you very much.

I know quite a bit about this Pix Theater in Centerville, Tx My father owned it from 1946 to 1957. His name was William Van Wyk, Sr. He put in a wide screen in the 1950’s. He received a lot of grief and threats because in the 50’s, he said that blacks paid the same money as whites and they would not have to wait for all the whites to go in before buying a ticket and sitting up in the balcony. He put in the same bathrooms, concessions, and seating in the balcony but the times were just too inflamed to change the seating at that time. Mr. Dickey who published the local paper ran the projector and Mrs. Dickey sat in that little booth and sold tickets. The office was the small door on the right of the entrance. Local teenagers, the King sisters ran the concessions. I was born in 1946 when he bought the theater and we moved to Waco, Texas in 1957 when he sold the theater. I was in the refurbished Cliftex Theater in Clifton, Texas where our ranch is located, and it looks just like I remember our theater – in the bathroom I was surprised to see a poster of reel theaters in Texas history with a picture of our Pix in Centerville. WVW