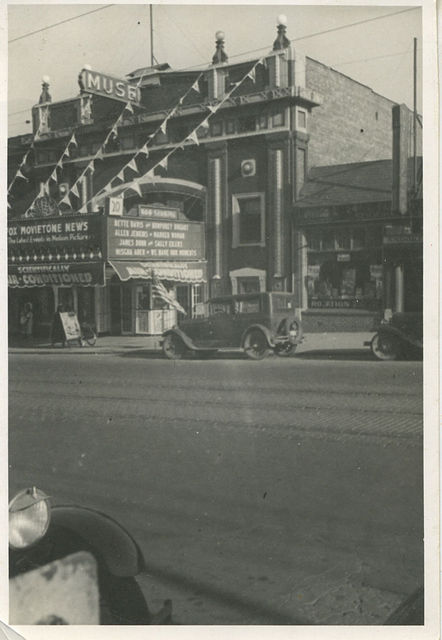 The Muse was built in 1916. After operating for some time as a movie house, it became an “adult” theater for a while in the 1970s, then sat vacant. A gentleman purchased it with the intent of refurbishing it into a Christian activity center, but sufficient funds never materialized. It was damaged by fire in the late 1990s and was then demolished. The site is now, of course, a parking lot.

It would be curious to see an earlier picture of this theatre. It could be just the picture that LOST MEMORY provided showing the theatre in it’s waning stages, but the facade on this one is hideous painted all black like that. Pretty scary looking. I wonder if the inside was just as ‘scary’ looking. Usually once these classic theatres become ‘adult’ houses, they are irrepairably destroyed. There is another hideous one that still stands in Worchester, MA…the Paris, also destroyed by becoming an adult house. I believe it will suffer the same fate as the Muse.

The Muse was a grind house featuring exploitation movies by the mid-1960s, when it achieved its moment of glory (such as it was) by hosting the world premier of Cambist Films' release “Rent-A-Girl” on October 15, 1965. The upcoming event was duly noted in Boxoffice of October 11, lest any Omaha area subscriber miss out.

For anyone unfamiliar with Cambist Films, the Grindhouse Cinema Database provides this page about the company and a few of its lurid releases.

I remember on the west side of the Muse was Christian Noble Furs, which is now located in Regency Fashion Court. I was old enough to go to the Muse when it was open, but never did. People said so many negative comments since it was an adult theater. Though, I did work with someone who did janitorial work when the theater was closed. He said it was always a mess, especially the floor in the screen area. He didn’t go into much detail on what he meant and I don’t think he wanted to explain much further.