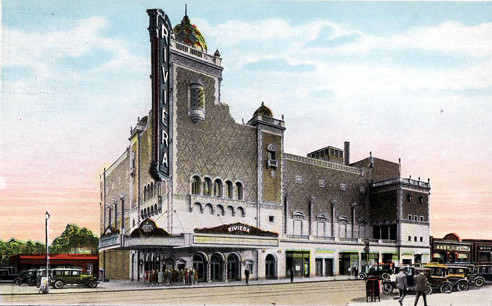 The Riviera Theatre was built in 1926 and opened on March 26, 1927 with Adolphe Menjou in “Evening Clothes”. It was built by A.H Blank, a subsidiary of Paramount Pictures Inc. Two years after opening on May 9, 1929 it was re-named Paramount Theatre. It was distinctive for its unusual Atmospheric style Moorish and Italian Renaissance architecture, a combination seldom seen in the Midwest.

The courtyard Atmospheric interior, labelled Hispano-Italian by Eberson, had a sky-like domed ceiling painted dark blue with small, recessed incandescent twinkling lights simulating stars on a tropical night, with artificial fleecy clouds. The lower lobby had water fountains and aquariums filled with goldfish. The orchestra pit and Wurlitzer theatre organ could be raised or lowered with hydraulic jacks. Both stage productions and motion pictures were presented.

Frome 1952 the theatre was mostly dark, with only a few stage shows being presented and a brief period when it was used by Omaha’s Bowling League. Following a renovation and being taken over by the Dubinsky Brothers chain, it reopened in June 1962 with a reduced seating capacity of 1,465 as the Astro Theatre with James Stewart in “Mr. Hobbs Takes a Vacation. It had a 70ft wide screen and was equipped with 70mm projectors. The huge corner wrap-around marquee, which had become a problem to maintain, was covered by a vinyl material and a single large name and program sign erected above the corner. The Astro Theatre closed in the early-1980’s, and in the late-1990’s faced the wrecking ball.

Most fortunately, Mrs. Rose Blumkin, a wealthy Omaha business woman, purchased it from Creighton University and completely restored the theatre to its original opulence. The theatre reopened as the the Rose Blumkin Peforming Arts Center, after its saviour.

The theatre is now listed in the National Register of Historic Places.

The mosaic floors in the former lounges and in the lobby have all been restored. I heard that a vertical marquee had been in the original plans for the renovation, but it was not done, I believe because of cost. If you look closely, you can still see the places along the corner of the building’s exterior where the vertical marquee was attached. The original vertical marquee starred in a 1927 newspaper ad advertising the power of the electric sign to draw customers to one’s business. At the time, lighted signs were rare, and businesspeople actually had to be persuaded to add one! The ad appeared in the Omaha World-Herald, and possibly also the Omaha Bee, which is now defunct.

Thanks for the information and I’ll take a closer look at where the impressive vertical marquee once was attached.

OMAHA, Oct. 7 – Ten thousand dollars, the weekend receipts of the Paramount Theater, were taken from Glen McDaniel, assistant manager, at the point of a pistol early today. The robber compelled McDaniel to put the money in a sack and then fled in an automobile.

The Astro Theatre opened in June, 1962, according to the June 25 issue of Boxoffice Magazine. The theater had been mostly dark since 1952, with the exception of a few stage shows and the brief period when it had housed Omaha’s professional bowling league. In March, 1962, the theater was leased from Creighton University by Dubinsky Bros. Theatres of Lincoln, Nebraska, and the Dubinskys were responsible for the hasty remodeling. As the Astro the house seated 1465, reduced from the nearly 3000 it had previously held.

Building looks real nice but the plastic marquee looks out of place.

A photo I took of this Beautiful Theatre back in Nov of 2007.. View link ..
RAC Photography

The theater’s organ was built by the Wurlitzer Company in 1927 as their Opus 1571. It is currently located in the Place de la Musique, a private museum in Barrington Hills, Illinois. It is reportedly one of the largest theater pipe organs in the world, currently having about 80 ranks and approximately 5000 pipes. It has been restored and expanded under David Junchen, after the museum installed it in a purpose-built music room.