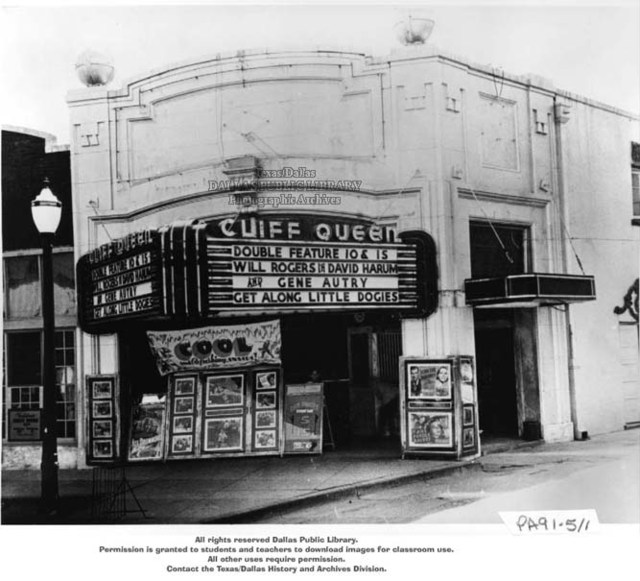 The Cliff Queen Theater opened in 1914 in the Oak Cliff section of Dallas. It was located on Jefferson Boulevard near Lancaster Road.

Operated in 1946 by Gene Autry Enterprises.

A 1937 image of the Cliff Queen that was located in Oak Cliff.
Double features are playing featuring Gene Autry and Will Rogers.

A 1940s movie ad for the for the Cliff Queen in Oak Cliff.

Update: When the theater closed it was the oldest suburban theater in Dallas. In 1946 Gene Autry Theaters operated the Queen.

Address should be changed from 661 to 616 E. Jefferson, in accordance with address published in newspaper ads.

Also, map link takes you to W. Jefferson, which is nowhere near Lancaster, where the Cliff Queen was.

The Cliff-Queen opened in 1914 at 616 E. Jefferson by W.J. Shivers with nearly 700 seats. E.H. Hulse was the next operator in 1915 followed soon thereafter by George M. Blackburn. The theater was the site of political speeches and bond rallies during World War I. W.W. Ard purchased and remodeled the theater in 1922 which probably explains the reduced number of seats.

L.L. Dunbar was the next and longest operator of the theater. Community-minded, during the Depression, the theater offered free shows to the poor and unemployed, gave 40,000 tickets over many years to servicemen (Dunbar said it was the only theater with such a policy in Texas), and always allowed firemen and police in free. But the theater ran into a couple of problems. Dunbar lost a court battle with ASCAP over music rights. On Oct. 14, 1944, the theater was padlocked for failure to correct fire hazards. Dunbar re-opened the theater in time for Christmas that year.

The last show appears to be a double-feature of “Chicago Deadline” and “Arthur Takes Over” on March 12, 1950. The building is said to be vacant from that date forward. In March of 1958, the Cliff-Queen was identified as one of 20 buildings to be knocked over including the Oak Cliff City Hall and the 1888 constructed Hamilton Pharmacy Building. At the time of its closing, it was the second oldest theater in the city and the longest running suburban house.