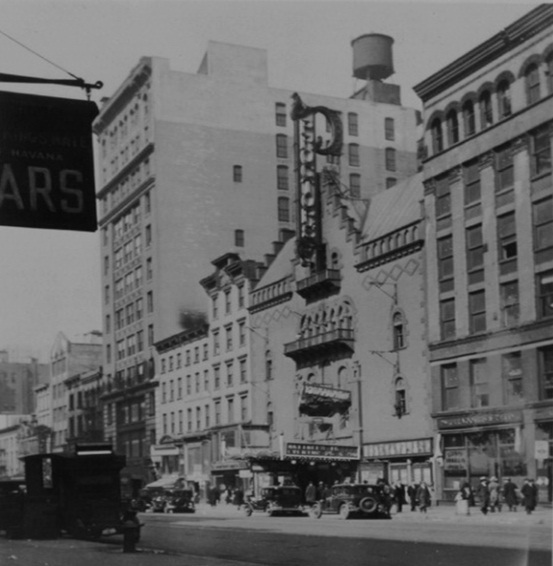 Its opening delayed by the discovery during excavation of flowing springs with water of such “remarkable purity” (according to The New York Times) that it would be used both to fill the rooftop water tanks and for drinking purposes, Proctor and Turner’s Twenty-Third Street Theatre presented the stage production “A County Fair” on March 6, 1889.

Frederick Francis Proctor’s intention, upon entering the New York City market, was to present legitimate theatre at prevailing Broadway prices. For this venture, his theatre design included electric lighting throughout (with gas fixtures installed in case of equipment failure), a gray-blue ceiling supported by walls of reddish gold, rails and a proscenium arch of gilded gold, and draperies of stamped velvet. Within a few short years, Proctor was exclusively presenting vaudeville at this 1,500-seat venue and the later additions to his NYC empire.

By 1896, this theatre was presenting projected moving pictures via Edison’s Vitascope. In the early-1900’s it was operated as the Keith & Proctor’s Twenty-Third Street Theatre until the partnership was dissolved in 1911. It continued to feature motion pictures, as part of a vaudeville program in the first decades of the 20th century, until March 7, 1937, when the damage caused by a fire forced its closure.

The following year, the RKO circuit, which had acquired Proctor’s holdings a decade earlier, opened the RKO 23rd Street Theatre, listed elsewhere on this site.

This theatre is listed under New York City in the 1897-98 edition of the Julius Cahn Official Theatrical Guide. It’s listed as “Proctor’s Twenty-Third Street Theatre” with F.F. Proctor as Manager.
The seating capacity was 1,551; The proscenium opening was 32 feet wide X 42 feet high and the stage was 39 feet deep.

According to the NYT it did just that while the 14th Street location still ran Vaudeville. The article specific states “Keith & Proctors Twenty Third Street”.

Here’s an interesting souvenir from this theater from 1891:
View link

For many years into the seventies and eighties, the brass letter “Proctors” remainded imbedded in the sidewalk delineating the width of the original entrance.

Listed in the 1941 Film daily Yearbook as the BARCLAY.

The Bijou Dream theatre mentioned in comments above, was located at 145 W. 23rd Street in in American Motion Picture Directory 1914-1915.

The address for this theatre covered from 139 to 145 so Bijou Dream should be added as an aka name.

An old picture of the theater as Proctor’s Twenty-third Street:
View link

Proctor’s 58th Street Theatre, opened in 1895 as Proctor’s Pleasure Palace, was also called the Bijou Dream, according to Our Theatres To-day and Yesterday, by Ruth Crosby Dimmick, published in 1913.