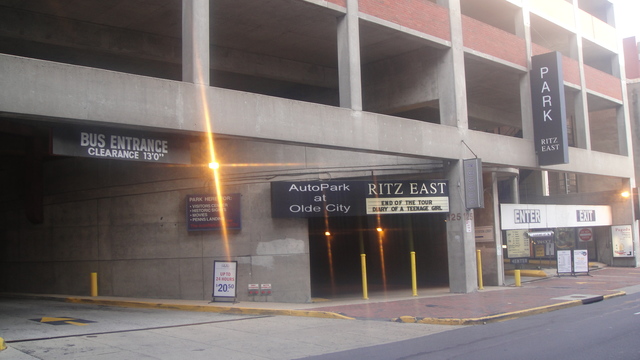 The Budco Olde City Twin opened on June 26, 1981. Theatre located on Sansom Street between Front and Second Streets. Olde City Twin closed on Dec. 13, 1998 as AMC, which had purchased the Budco chain, did not renew the lease. The Ritz Theatre group remodeled the theatre and it reopened as the Ritz East on May 21, 1999. The Ritz Theatre group also operate the Ritz Five and Rize at the Bourse in Philadelphia.

As of 3/30/2007, the Ritz Theatres in Center City Philadelphia (Ritz 5, Ritz Bourse, and Ritz East) are now offically owned by Landmark Theatres

And more importantly, or at least I feel, is that it will be the FIRST — yes, you read that right, FIRST — time any movie theaters directly IN Philadelphia will have digital projection. Or at least this according to the Philadelphia Inquirer for Sat., March 31, 2007: View link

And let’s hope the Philadelphia Inquirer is telling it straight this time. For if it is true I compare this to the Berlin Wall finally coming down or something. Yet Landmark is saying — at least according to that article — that at least two of the Ritz Theatre auditoriums will get digital projection.

And if so, can democracy be very far behind?

I began attending in April 1988, and my notes indicate 421 seats for the larger auditorium, the one on the right.

An article on 12-14-1998 stated that the AMC Old City 2 had closed, one year ahead of its lease term, but would reopen in the spring as
the Ritz East, and had a total of 750 seats.

In 2001, I estimated 300 seats for the Ritz East auditorium on the right, which was then stadium seated, and a 30 to 35 feet wide scope screen.

The best of the Ritz Theaters in Philadelphia. I love the digital projection, the consessions. the location. The Ritz 5 needs to close down and remodel, it is the worse of there muliplexes. According to the recent issue of Film Comment, Landmark, their owner, had done very well profitwise.

The Ritz Bourse reopened after being closed for a few weeks for installation of new air conditioning system.

Sept 8th, Ritz East manager told the moviegoers at “Moonrise Kingdom”, that this was the last week for 35mm projection at their theaters. She said she regrets the change but their projectors were very old. Paul Thomas Anderson “The Master”, will be shown in 70mm in NYC. The Ritz 5 will show it here.

ALPS: Any idea what type of digital projection was installed? Hope it was 4K…

The best theater of the Philadelphia Landmark theaters, the staff are great and some of them remember you. The screens and the sound are top notch and on occasion, the manager will greet you before the film starts. I go out of my way to attend a film there *****

Am I crazy or confused…but is the screen larger in the smaller auditorium #2 ?