Previous Names: Ritz at the Bourse 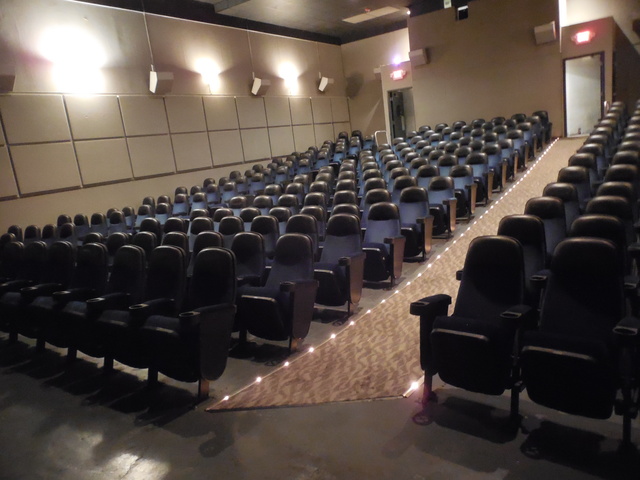 This theatre opened as one of three Ritz Theaters located in Center City Philadelphia (along with the Ritz East and the Ritz Five). Located adjacent to the food court/shopping mall known as The Bourse, it’s a fine theater that focuses mainly on foreign and independent films.

The Ritz at the Bourse opened September 19, 1990, with 1,000 seats, five screens and the films “Metropolitan” on two screens, “White Hunter, Black Heart”, “Jesus of Montreal” and “La Traviata”, Franco Zeffirelli’s 1982 adaptation of the Verdi opera. The theatre was built beneath the 450 car garage of the new Omni Hotel. With chrome railings, Art Deco style sconces, and other streamlined appointments it was called ‘Cunard Modern’ by Ritz Theatre owner Ray Posel. After Posel’s passing, in 2007 his family sold the Center City Philadelphia theatres, including the Ritz at the Bourse, to Landmark Theatres. In 2016, Fire Department occupancy signs are in auditoriums allowing up to 133 in auditorium B (or 2 as staff describes auditoriums by letters, whereas internet purchases specify numbers), 150 in C (or 3), 163 in D (or 4) and 146 in E (or 5). No sign is evident in auditorium A (or 1) which has about 200 seats.

Landmark Theatres, under which has its own new ownership since December 2018, departed at the end of January 2020, with January 26 last day of films. The closing movies were:“A Hidden Life” in aud 1, “A Beautiful Day in the Neighborhood” in aud 2, “Honey Boy” in aud 3, “The Lighthouse” and “Pain and Glory” in aud 4 and “The Irishman” and “What She Said:The Art of Pauline Keal” in aud 5.

The Philadelphia Film Society reopened it on June 11, 2021, after vacating the Roxy Theater in Center City, which had closed in March 2020 due to the Covid-19 pandemic. PFS at Bourse have installed 7.1 surround sound in all auditoriums and 4K laser projection in the largest auditorium.

Does anyone know who the architect was for the Ritz at the Bourse? And, since the Ritz has five screens, how many moviegoers does each auditorium seat?

As with the Ritz Five, Landmark refuses to put money to update this theater as well. I have encountered too many broken seats as of late. A security issue remains from time to time mentally ill homeless people would find their way in the theater. Still better than the Ritz Five.

Rivest266 I would like to say thank you so much for finding all these wonderful opening ads for all these theaters that you do. :)

The Philadelphia Inquirer has an insert today with Philly.com Readers' Choices 2017 winners. For movie theaters- this theater- the Ritz at the Bourse.

Ritz at the Bourse is the current Philly home of “Rocky Horror,” with an amazing cast performing one Friday each month.

Disgrace. I knew this was going to happen, when the escalator was broken for over a year. I am going to miss this theater. The fashion district AMC will not show art movies, I gues I will have to go to New York more. Ritz at the Bourse would show too many films that you could watch on Demand, and Cohen Media is wrong owner.

The Ritz at the Bourse will live again under new owenership of Philadelphia Film Society. The new theater will be named PFS at the Bourse. A mixture of programing. This will end their involvement with the Roxy Theater, which will close perm.

Thumbs up to the PFS for reopening the Bourse theaters. Will miss the Roxy though.