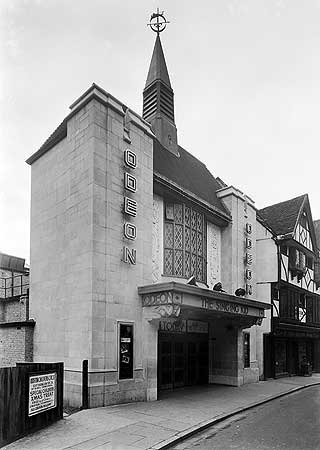 The Odeon Theatre was built as one of the original Oscar Deutsch chain of Odeon’s and opened on 9th March 1936 with Jessie Matthews in “First a Girl”.

Due to its location in the historic town centre, it was decided not to opt for a sleek Art Deco style building, but to blend in a little with its surroundings and architect Andrew Mather came up with a pleasing mock Tudor style which was carried through to the interior of the building.

In the auditorium seating was on a stadium plan with no overhanging balcony. The original seating capacity was for 729. There were 288 seats in the stalls and 441 in the raised section at the rear. Decorations on the side walls were of timber framed panels and lantern like light fittings hung from the arched roof which was decorated by bands of decorative plasterwork.

The Odeon was one of the large batch of cinemas sold to the Classic Cinema chain in 1967 and it was re-named Classic from 3rd December 1967. It was taken over by Coral for films and bingo use from 26th September 1969 and re-named Royal Cinema. From 1st May 1974 it ceased screening films, the last programme to be shown was Kenneth Haigh in “Man at the Top” and Bruce Lee in “The Chinese Connection”. It became a full time Coral Bingo Club until 21st January 1979 when films were introduced again, opening with John Travolta in “Grease”. Bingo was still played in the afternoons and some evenings and this carried on until 8th June 1985 when bingo took over full time again. Bingo ceased in around 1987 and the building closed down completely.

It had some film use again from August 1990 when independent operators tried to make the building a going concern as a cinema, but this was short lived..

Eventually it was fully re-opened by its current operators from 11th February 1994 as the New Royal Cinema.

On 22nd March 1988, the former Odeon was designated a Grade II Listed building by English Heritage.

Some recent excellent 2004 photographs (exterior and interior) of the Royal Cinema, with thanks to Jonathan Goodbun:
View link

An opening view of the Odeon in 1936:
View link

An evening photograph with the Classic Cinema signage and bingo which dates it around 1969 after Coral had taken over:
View link

A recent photograph of the Royal Cinema:
View link

Hi KenRoe, only just found this site existed. Sorry to see that my photo’s are not showing any more will try to up date that.