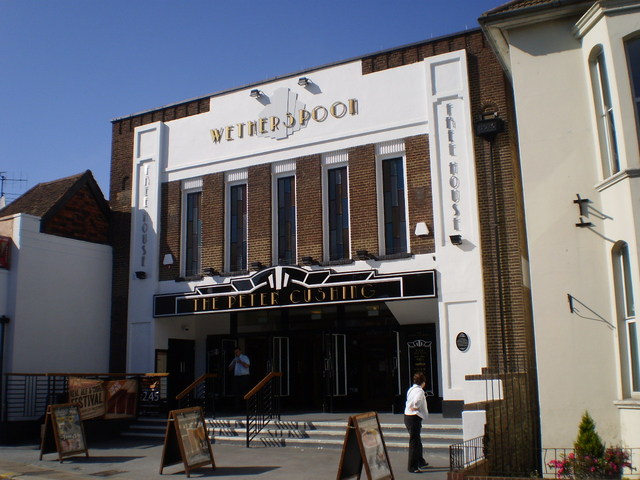 The Oxford Picture Hall was opened on 11th December 1912. It was a purpose built cinema and had a scrolled and glazed canopy and inside the auditorium seating was on one level. There was a cornice which had heavy plaster decorations and carved capitols.

In 1936, the owners decided to re-build the cinema and work began, with the new building being erected around the original one. The balcony of the new building cleared the roof of the old one by about 2 inches! During re-building the old cinema operated as usual. It was closed for 3 weeks while internal demolition was carried out and the ‘new’ Oxford Cinema was ready to open.

The Oxford Cinema was designed in the (then modern) Art Deco style, by a local architect W.M. Bishop and opened on 27th July 1936 with Jack Hulbert in “Jack Of All Trades”.

Part-time bingo was introduced in 1962 and by 1980 only the 394 seats in the circle were being used on film nights. Films ceased on 4th October 1984 when an audience of 3 and a local newspaper reporter sat down in the circle to see the final film;Michael Caine in “Blame it on Rio”.

The building was used as an independently operated full time Bingo Club for many years, which closed in the summer of 2010. It is now a pub, part of the J. D. Wetherspoon chain which opened on 23rd August 2011 as the Peter Cushing, named after the film star/actor who resided in Whitstable..

and in minature as revised by Hornby for their Skaledale range as the Essoldo
http://www.flickr.com/photos/woody1969/4529828296/

I had the pleasure of visiting this building in August 2011 – just a week after it’s re-opening as a Wetherspoon pub/resturant. I must say, the £1.5M re-vamp is very impressive. Please do look at the photo posted on my Flickr page. For comparison purposes Ben Gibbs, Kent History Forum, has allowed me to use photos which he took just prior to Wetherspoons buying the premises: http://www.flickr.com/photos/22737830@N02/sets/72157627800118460/

The interior taken as the Kings Bingo Hall dates from May, 1998

I have loaded the original exterior of the Oxford Cinema