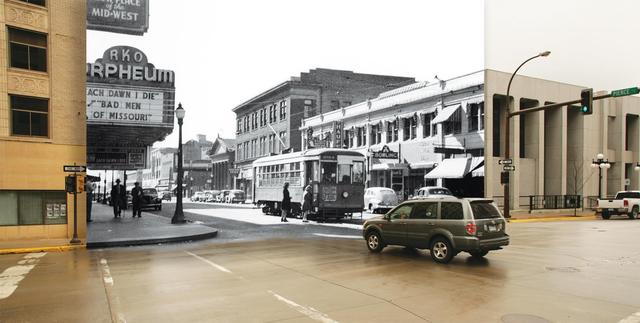 Opened in 1912 as the Isis Theatre, it later became the USA Theatre. This became the city’s second Orpheum Theatre in 1919, and was designed by George Rapp, of the architectural firm Rapp & Rapp. After the third Orpheum Theatre was built in 1927, this theatre became the Capitol Theatre from December 25, 1928. By 1941 it was operated by Paramount Pictures Inc. through their subsidiary A.H. Blank. It was modernised in 1942 to the plans of architectural firm Wetherell & Harrison.

The Capitol Theatre was torn down in the late-1960’s or early-1970’s. A JC Penney’s store was built on the site. That has since closed and is now a museum.

The Capitol Theatre was located at 420 Nebraska Street and it seated 1700 people.

The Capitol Theatre was one of seven theatres that was operated by one of Paramount Theatres subsidiaries.

Number 10 is a photo of the Capitol:
http://tinyurl.com/26chcm

The Capitol Theatre was extensively altered in 1942, removing shops from the building front, extending the balcony, and increasing its original seating capacity by 300. An article with photos appeared in the July 18, 1942, issue of Boxoffice Magazine. The renovated interior was in the Art Moderne style. The project was designed by the Des Moines architecture firm Wetherell & Harrison.

This PDF contains a brochure for a “walking tour” of Nebraska Street, showing many historic buildings that have been demolished. The caption for the photo of the Capitol Theatre (#10) says that it opened in 1912 and was called the Isis Theatre and the U.S.A. Theatre as well as the Orpheum Theatre before finally becoming the Capitol.

This theater was the second Orpheum Theatre in Sioux city, opened in 1919. Compare the 1955 photo of the Capitol in the walking tour brochure with an earlier photo of the Orpheum (bottom row, second from right) in this montage (published in 1923) unearthed by CSWalczak. They are unmistakably the same building.

The text from which the montage comes says that the Orpheum circuit built a new theater in 1918, which contradicts the walking tour brochure’s claim that the house that became the second Orpheum had been built in 1912. In fact, an October 5, 1912, item about the Isis Theatre in The Moving Picture World shows that the Isis was in a single-story building, 50x100 feet, and it had only 400 seats. It’s possible that parts of the Isis' building were incorporated into the new Orpheum, but unless the Isis had already been greatly expanded from its original size at some point, reconstruction for its conversion to the Orpheum had to have been extensive.

The brochure doesn’t give a time line for the names, so I’m not sure when it was called the U.S.A. Theatre. It might have been during the one-year gap between the opening of the third Orpheum and this theater’s reopening as the Capitol. But it could also have simply remained closed through most of 1928, in which case it would have been the called U.S.A. for a while before becoming the Orpheum in 1919.

In Joe’s comment above, the link for the montage referred to in the second paragraph should have been this one.

The profile picture is of the 1928 Orpheum on Pierce Street, not the Capitol on Nebraska Street.

Also, the JCPenney is gone, the building is now home to the Sioux City Public Museum.