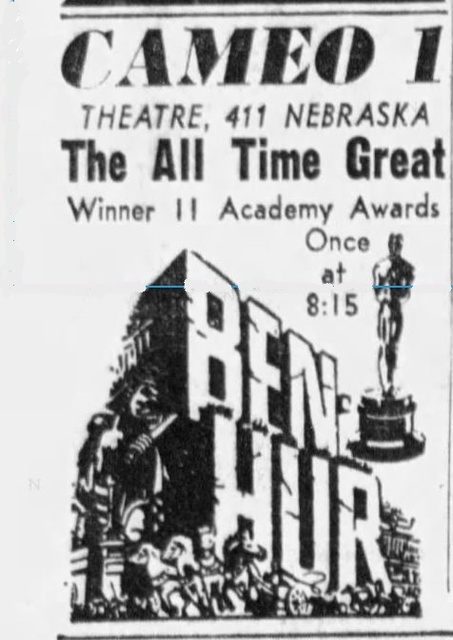 This house might have been twinned in its later years. A “25 years ago” feature in the May 5, 2013, issue of the Sioux City Journal said that the owner of the Cameo Theaters were temporarily closed and the owner was trying to decide whether to dispose of or continue operating the house, which had suffered water damage. The headline and brief article used the plural “theaters” three times, so it wasn’t just a typo.

It’s also possible that the Cameo opened in the 1910s. A brochure for a walking tour of central downtown Sioux City says that the Cameo Theatre was in a building erected in 1901-1902 as an annex to the Martin Department Store, the main building of which was on 4th Street. The store moved to an entirely new building in 1916 and its old buildings were then converted for other uses. The brochure doesn’t say when the theater opened, only that it was in the former department store annex, so it’s possible that it was installed there in 1916, maybe originally operating under a different name.

The original 1901 facade, designed in the Beaux Arts style by architect Henry Fisher, is still largely intact, but the building doesn’t show any signs of having once housed a theater.

This opened on August 6th, 1969 with two screens. Grand opening ad in the photo section.

The part of the building the Cameo was in dates back to around 1902, and like Joe Vogel mentioned the building was originally a department store, and after it moved across the street it became a music store. The building became a mixed use building in the 1960s. Riverest266 is correct that the Cameo opened in 1969, and closed in 1988.

Anytime Fitness was the most recent occupant of the space once home of the Cameo. The 2nd and 3rd floors of the L shaped building were converted to apartments in the late 1990s. The original part of the building facing 4th Street was built in 1885 and is one of the oldest surviving buildings in downtown Sioux City. The building is now called the Century Plaza.

The Cameo did not open until 1969. In 1906 the entire building was still a department store, and stayed that way for another 10 years. It then became a music store, and after that closed, it became a mixed use building paving the way for the cameo to open in the first floor of the Nebraska Street Annex in 1969.