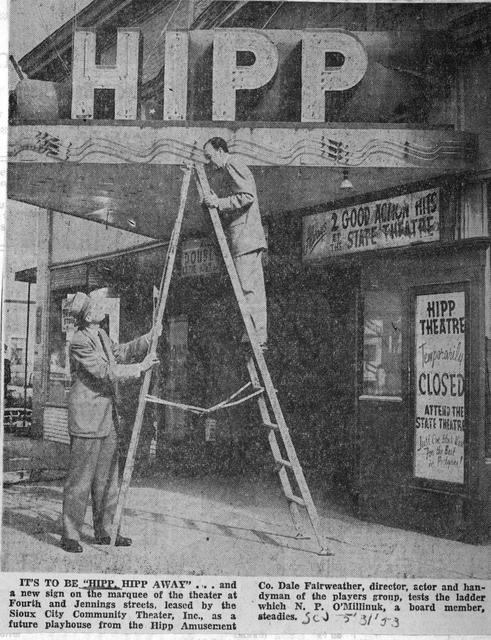 The Hippodrome Theatre opened by 1923, with seating listed at 508. It was operated from the early-1940’s until its closing in the 1950’s by Affiliated Theaters Inc. based in Sioux City, IA

There is a picture of a Hipp Theater in this montage of old theaters in Sioux Falls which may have been this theater. (The marquee for the Hippodrome in Cleveland read Hipp for years).

It seems unlikely that any theater other than the Hippodrome would have ended up being called the Hipp. They must be the same house.

Here is a snippet from a 1936 issue of The Motion Picture Herald which mentions the Hipp Theatre:

“A. H. Blank, head of the Tri-States Theatres, Inc., took over six independent theatres in Sioux City, Ia. Mr. Blank already operated the Capitol and Princess theatres prior to his taking over the Rialto, Granada, Loop, Circle, Iowa and Hipp.”

Snippet views of the 1938 and 1942 editions of Film Daily Yearbook at Google Books also mention the Hipp.

Also, the photos CSWalczak linked to are from a book published in 1923 (excerpted here), so the theater was at least that old.

I do a lot of genealogy work, and, a number of years ago, I asked my late father to write down his impressions of growing up. He was born in Yankton, South Dakota, but grew up in Sioux City during the 1930s, and wrote this about what was widely known as the Hipp Theater. I’m not making a comment on the “Hipp” Theater at all – just passing on a family history notation.

In the early 1930s my father (J. B. “Jack” Jackson) used to walk five miles each way to work, when they couldn’t afford the nickel street car. In the late 1930s, once a week, on his way home from work, Jack would go to the junkiest theater in Sioux City, the Hipp Theater, where he would buy a ten cent lottery ticket. One day he won the $100 jackpot, and took the whole family out to eat at Toller’s Drug Store, one of the nicest places in town. Afterwards, they went out to a movie at a nice theater like the Orpheum or Capital (not the Hipp Theater).