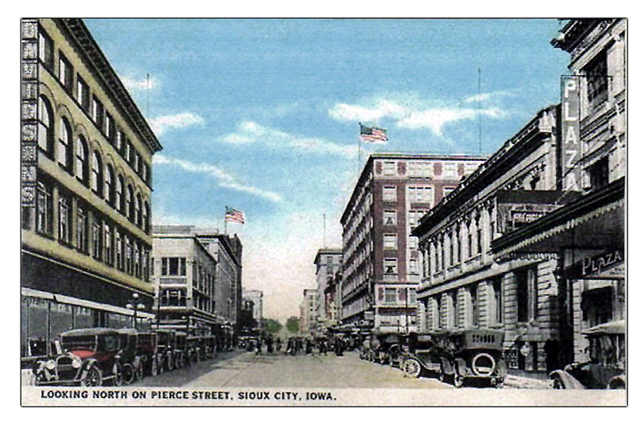 The Plaza Theater was located on North Pierce Street, and opened in 1916, a conversion of a former wholesale liquor house. It had gone from listings by 1930. It had no connection with the Plaza Twin that opened in the 1990’s.

The Plaza Theatre was in operation by 1919, when it was mentioned in The Moving Picture World.

The Plaza can be seen at the top left in this photo montage of old historic theaters in Sioux Falls.

From the late 1920s a postcard view of the Plaza along with a busy Pearce Street.

The Plaza Theatre opened in 1916. Here is an announcement from the January 8 issue of The Moving Picture World that year:

“SIOUX CITY. IOWA.— Plans have been filed for the new Plaza theater in Sioux City which St. Elmo Bateman of Waterloo is promoting. A wholesale liquor house is to be transformed at a cost of $35,000. It will contain a pipe organ, the only one in a Sioux City photoplay house.”

The November 20, 1915, issue of The Music Trade Review had an item about this theater:

“The Plaza Theatre Co., of Waterloo, has taken a lease on the Selzer building on Pierce street, in Sioux City, and will convert it into a high class moving picture house.”

The Selzer Building was under construction when it was mentioned in the December, 1905, issue of Engineering Review, so was probably completed in early 1906. It was built for Charles Selzer, son of Rudolph Selzer, a Hessian immigrant who had established Sioux City’s first brewery in 1860.

I don’t know how much the exterior of the Selzer Building was altered in the conversion to a theater (probably very little,) but according to the records of the American Terra Cotta and Ceramic Company the original architect of the 1905 structure was Henry Fisher. I’ve been unable to discover the architect for the 1915-1916 conversion, but it would not have been Fisher, who retired in 1909.

Surprisingly, even without an address to work with Google Maps has put the pin icon for this theater almost exactly at its actual location. The seven-story building prominent in the vintage postcard Don Lewis provided is still standing at the northeast corner of Pierce and 4th Street, and the Theatre was in the second building south of 4th on the same side of Pierce. This block is now mostly parking lot, so we can mark the Plaza Theatre as demolished.

The Plaza Theatre would have been roughly across the street from the entrance of the modern Great Southern Bank building which uses the address 329 N.Pierce, so the theater’s address would probably have been approximately 330 N. Pierce (Google street view estimates the location as 351, but of course it exaggerates.)