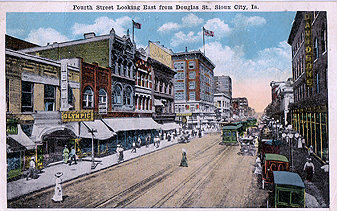 Opened in October 1908, the Olympic Theatre was an early vaudeville and film house in this city. A large Home Furniture building now occupies much of the area in and around this location.

Sioux City, Ia.—Fred Melcher, of Chicago, has arrived in the city and will immediately take charge of the new moving picture theatre, the Olympic, which is being fitted at 415 Fourth Street. An elaborate front is being put in the new theater.

The February 14, 1914, issue of The Moving Picture World mentions the Olympic Theatre and gives its seating capacity:

“Mr. and Mrs. C. E. Wirick paid a visit to The World office last week. Mr. Wirick is owner of the Olympic and Majestic Theaters in Sioux City, seating, respectively, 300 and 400 people.”

The item also has this useful line: “There are 11 moving picture theaters in Sioux City, the largest being the Royal, with a capacity of 600.”