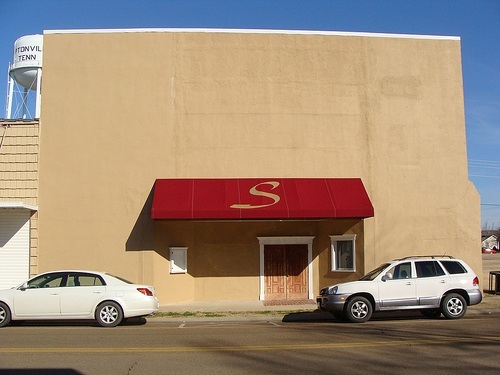 Opened in 1915, the Strand Theatre suffered major damage in a fire January 1938. It was rebuilt and by 1941 it was operated by the Memphis, TN based Strand Enterprises Inc. chain. I came across a photo of the Strand Theatre, which seated 521. After closing in 1965, it was used for many years as a Masonic Lodge.

The Strand closed in the mid 60’s. The last time I remember seeing a movie there was when I was in the first grade (c. 1965). We got out of school to see a double feature Disney film. I think it was The Nutty Professor with Fred McMurray and The Shaggy Dog. Both in black and white.

The Theatre was owned by Utra Burton, who also ran the Lake Drive Inn in Wynnburg, TN.

The Balcony was for blacks only. They entered the theatre via the fire escape on the side of the building, where their ticket window was. I always wanted to sit up there, and my Grandmother’s cook promised to take me, but never did before it closed.

The Masonic Lodge bought the building, leveled the theatre’s floor, and used it as their meeting hall.

One of the men who worked for my father said that Harry Houdini performed there early in his career, and had signed the wall backstage. Alas, that had been painted over (if it was true).

Thanks for the update. It is now the Harmony Lodge #184 Free and Accepted Masons on Church Street in Tiptonville.

The Strand was owned by G.W. Haynes in the late 1930s. A fire caused major damage in January 1938, but apparently the theater was rebuilt.

According to the Masons, they moved out of the Strand in 2005:
http://www.harmonylodge184.org/