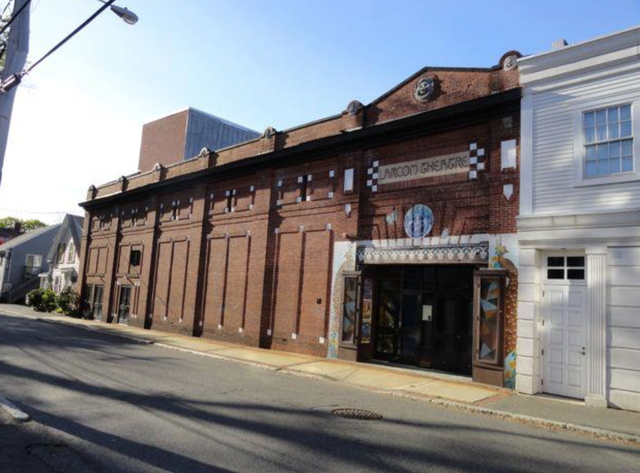 The theatre was managed by Harris and Glover Ware and was named for Lucy Larcom, a 19th Century Beverly writer. It opened as a movie and vaudeville house. Later, it was run by the Ramsdell Brothers and still later by E.M. Loew’s Theatres.

The architect of the Larcom Theatre was George Swan. Opening night was October 28, 1912 with the film “Count of Monte Cristo” plus a concert on stage.

I was in the Larcom last Saturday morning with the THSA group. The theatre looked great — the Le Grand David company deserves much credit for the high level of maintenance of their two theatres in Beverly.

The Theatre Historical Society archive has the MGM Theatre Report for the Larcom Theatre. Exterior photo taken in May 1941 on Wallis Street. It says that the theater is in Good condition and has been playing MGM product for over 10 years. 435 orchestra seats and 309 balcony seats; total: 744 seats. Competing theaters are the Ware Theatre and the Strand Theatre.

I believe the place was twinned during the end of it’s days as the Fine Arts X-rated house.Probably after video started making adult theaters unnecessary. The ad would always be in the local papers theater section. I’d guess they just put up a screen in front of the balcony seats.

The Fine Arts was my first job as a projectionist in the early 70s. X-rated stuff then. I went there when I was a kid when it was a regular double-feature movie house. Saw kid shows like Forbidden Planet with Popeye cartoons, even a serial chapter. The porn came later. It was never twinned. They didn’t worry about being raided. You could stand in front of the place and look up Wallis St. and see the Police Station. I believe the Magic group removed the old projection equipment. I went into a storage room under the booth one night and found dozens of film cans with decomposing nitrate film trailers that had been there for decades. I’m sure that was cleaned up with the restoration.