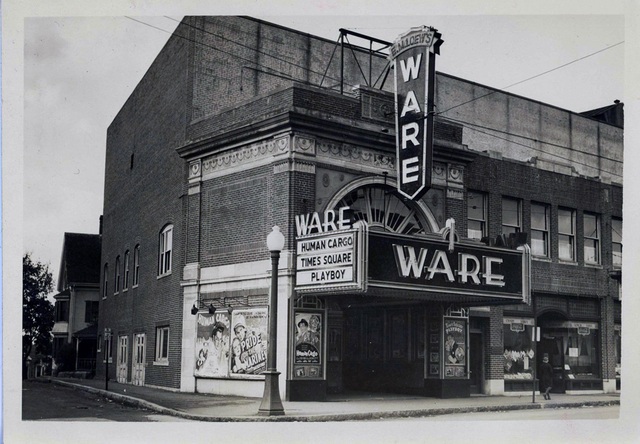 Opened in 1920 as the Ware Theatre with seating for 1,450. Belying an elegant lobby and sizable interior, the Cabot Street Cinema’s facade doesn’t do justice to this local gem. The Cabot Street Cinema Theatre is one of a handful of early-20th century theatres that is still showing movies in an area known more for its megaplexes.

The Cabot Street Cinema Theatre has been open almost continuously, and was only closed briefly in the 1970’s before the Le Grande David magic troupe bought and refurbished the theatre for their magic shows. The famous magic troupe continued showing a large mixture of films to compliment the stage acts. It was closed in spring of 2014. In November 2014 the building was sold and re-opened in February 2015 as a performing arts center.

Cesareo Pelaez, who played Marco the Magi in the Le Grand David company, died March 24 after a long illness. He was 79 and appeared in shows on stage in Cuba as a youth. He founded the Le Grand David magic shows in the 1970s and purchased the Cabot Street Cinema, and later, the nearby Larcom Theatre in Beverly. He is survived by his godson, David Bull, the “David” in the troupe’s name. Obit from the Boston Herald, 3-28-2012.

I recently noticed a new listing in the Boston Herald movie theater directory: the LPF Studio Cinema in Beverly. Located at 296A Cabot Street, which is very near the Cabot Street Cinema (at 286 Cabot St.) Anyone know anything about it?

I never heard of it, but their web site is http://www.lpfstudio.com/cinema/

Cabot St is now up for sale – here are two articles about the sale and it’s potential impact on the community:

Cabot Cinema has been saved. A consortium of five Beverly businessmen including Paul Van Ness who operates CinemaSalem have purchased it. It is being rehabbed and will show feature films and a variety of live entertainment. A restaurant within is also planned. Saving this jewel of the past is a dream come true, especially for the downtown area businesses. We came close to an unthinkable (in 2014) loss but got a happy ending.

Hey there, I attended the Cabot in October 2015 and managed to take as many photos as I could: https://flic.kr/s/aHskv6NNMY

(This is what I wrote about its condition on my Flickr description: Excuse the horrible quality photographs; this was kind of a spur of the moment event and I could only “shoot” with my iPhone, which was running on low battery.)

I went to the Cabot for the first time for a low-attended screening of Night of the Living Dead around Halloween in 2015. I had never been inside the theater and due to an insignificant amount of information available, I had no idea that it was still very much a gorgeous, extremely well-maintained palace kept close to its original condition and appearance. Structurally, it clearly has some issues from years and years of withstanding New England, but I was still blown away by the attention to detail retained and generally good upkeep. I wish I could have gotten into the balcony for a better view, or even just got better photos, but it was very dimly lit and this was the best my iPhone could do. As a fanatic of old movie palaces, I hope and pray that the new owners of the Cabot strive to keep the auditorium in line with its original appearance (the lobby has already been gutted and modernized and the old empty storefronts also appear to be undergoing the same treatment). I hope to return and continue to support the Cabot as long as it continues to be a true representation of what it once was.

Also, here’s a great video from last year (uploaded Oct. 2015) about the theater. It showcases all of the original features of the building from the original painted fire curtain to storage spaces behind bathrooms: https://youtu.be/nWYuEZ8LhgA

Ignore what I said in my last comment about the lobby being gutted. at around the 3:00 minute mark in the video above, the host shows that the original lobby is still intact above a drop ceiling. Simply amazing.

Unfortunately, “phase two” of the current owner’s renovation process seems to include “modify[ing] front of stage, flatten floor and purchase 150 removable chairs,” along with “install[ing] 400 new balcony seats,” rather than working with the original seating arrangement or refurbishing the current seats. You win some, you lose some.