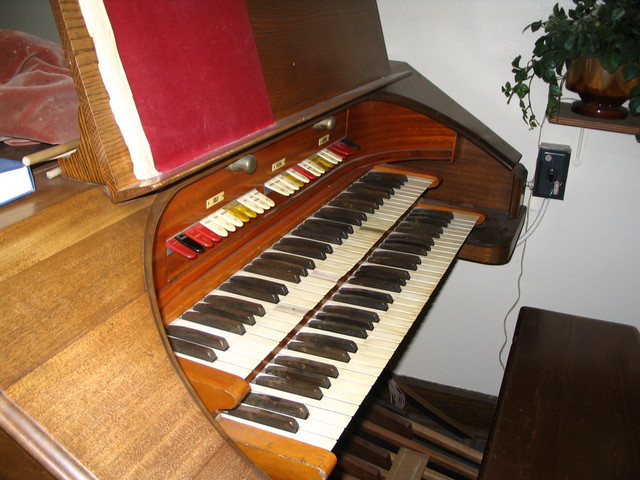 The Oriental Theatre did not have a Marr & Colton organ. It had an organ built by the Louisville Pipe Organ Company. The organ was Opus 512 built in 1926. The organ consists of 5 ranks (sets) of pipes. It has:

Originally it had traps (drums etc.). All pipework speaks on 5" wind. The organ was removed from the theatre and reinstalled in Calvary Lutheran Church at 5560 Shelby Street, Indianapolis in 1942. In 1964 the church was sold and renamed Tallwood Chapel. Pastor Don Foley held their first service in Tallwood Chapel December 1964. Tallwood Chapel used the organ until it fell into disrepair and became unplayable in the 1970’s.

The organ was purchased in 2005 by David M. Finkel of Shelbyville Indiana for inclusion in the Louisville “Uniphone” organ destine for the Strand Theatre in Shelbyville. The organ was made playable. A final service and archival recording was made in April 2006.

The organ will remain in storage until rebuilt and installed as part of the organ in the Strand Theatre in Shelbyville, Indiana.

I did a Google Earth map search, and the address came up as an empty patch of land right next to an on/off ramp for Highway 70. I assume the theater was torn down to make way for it.