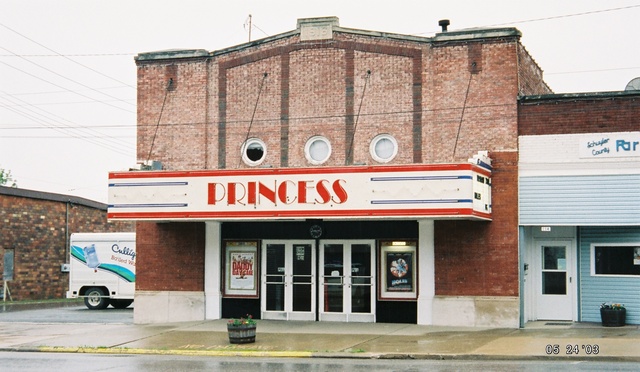 It was taken over and is operated from 1995 entirely operated by volunteers from the town of Rushville as the Preincess Theater.

The Princess Theater located at 116 E. Lafayette was built in 1916. Closing after the third business persons and idle for two years, the community came together and purchased the building, restored it and now has movies on Friday, Saturday, Sunday and special movies by request. It has received numerous awards and publicity from all over the US because of its uniqueness. There are 147 investors who volunteer at the operation. For movie titles, call 217-322-2722, inquiries and messages may be left.

The building first opened as the Princess Theatre on 12th May 1917, replacing an earlier theatre that was destroyed by fire in 1916.

In 1924 a 2Manual/5Rank Hinners organ was installed and one of the organists was bob Moore, who in later years worked for Balaban & Katz in Chicago playing organ in the Tivoli, Southtown and other theatres.

Also in 1924 the theatre was re-named Lloyd Theatre. The Lloyd was refurbished in 1974 when a new screen was erected, new carpets fitted, new stage drapes installed and a new marquee fitted to the facade. It continued as a movie theatre until 1993 when it closed. The theatre was remodeled and re-opened by the current management as the Princess Theatre in 1995.

Here is a recent article about the theater:
http://tinyurl.com/3b7f5m

Thanks for the photos.

The “Theater Changes” column of the October 4, 1937, issue of The Film Daily reported the change of name of the movie theater at Rushville, Illinois, from Princess to Lloyd.

Fire and Reconstruction: Prior to 1916, there was a wooden structure at 116 E. Washington called the Princess Theater, which offered films, along with live entertainment acts and the Princess Theater Orchestra. That building was destroyed by fire in early 1916. Construction on the pres- ent theater building began sometime in 1916, with all indications pointing to Saturday, May 12, 1917 as the opening day. The film shown at the grand opening was William Farnum in “Fires of Conscience” in six parts. The newspaper advertisement said, “Come to the Princess and be enter- tained. All our features are the high- est class films.” Matinee prices were 10 cents for children and 15 cents for adults; evening prices were 10 and 20 cents. The Rushville Times article that announced the opening said, “The Princess Theater is one of the most complete amusement houses in central Illinois. Transient visitors to Rushville will be impressed with this magnificent theater and carry away the impression of the city’s progres- siveness as represented in its amuse- ment place. The show room is 80 feet long. The new Princess will seat 475 people and its arrangement is well nigh perfect, no expense being spared in the installation of modern equipment.” An orchestra pit was installed in front of the small stage. The films were silent, so a musician had to sit at the piano, watch the screen, and cue the needed musical sounds. The building had six handsome ceiling fixtures. Along the side pilasters were sconces, the bottom of which contained blue lights, with electric fans attached on top. A hot water system was added. The ticket counter was at the right of the small lobby, which was adorned with posters announcing coming attractions. There were no restrooms or concession counter and although there was a popcorn stand on the corner of the square, the management forbade bringing in refreshments.

The Early Years: A Hinners pipe organ, built in nearby Pekin, was installed in March of 1924. The Princess’s organ had five sets of pipes and a harp. The organ chamber was located to the right of the projection booth, while the console was located in the orchestra pit so the organist could watch the screen and cue the sound effects. Bigger pictures sent a score along with the reels of film, but for lesser films, he had to make up his own cues. Mrs. Steinmill- er from Peoria’s Madison Theater played for the first two weeks. After that, Beulah “Sis” Hopkins played for several months. Later, Rushville’s Mildred Sloan was the full-time organist. Former Rushvillian Robert “Bob” Moore was the organist on special occasions; he went on to be organist for Balaban & Katz theaters in the Chicago area. During the early years, the Princess showed films Monday through Saturday, but not Sunday, when one was supposed to attend church rather than going to movies. In the late 1920s, there was a movement afoot to permit showing pictures on Sunday. Although local churches opposed showing movies on Sunday, the practice was approved when put to a vote. Shows started at 7 p.m., with a second showing at 9 p.m., if there was enough of an audience. There were also matinees on Saturday, and on Sunday after the blue laws had been put to rest. The year 1929 brought talking pictures to the Princess. Several changes were made to the Princess during the 1930s. The ceiling fixtures were removed and recessed lighting installed. The lobby gained recessed cove lighting. The ticket booth was moved to the center of the lobby and the area where it had been was converted into a ladies’ restroom with a crying room. A men’s restroom was added on the opposite wall. Air conditioning was installed, and the Princess became the coolest place in town on a summer evening. The stage was extended and outfitted with a new curtain, floodlights and stage lights. A new screen was installed, the sound system was upgraded, and the old wooden seats were replaced with more com- fortable ones. The Carl Pearson family owned the theater. During one of the remodelings, the Princess was renamed the Lloyd, after Carl’s son, and a new neon-lighted marquee was installed. During the 1940s, Carl died and Lloyd returned to operate the Rushville theater. About this time, a concession stand was added in a corner of the lobby. The original flat floor was removed during the 1950s and replaced with a sloped floor that afforded better viewing. During the late 1950s and early 1960s, television changed the movie industry, and the Lloyd Theater began showing films only on weekends. After Lloyd’s health began to fail during the 1970s, the theater was closed and put up for sale.

Changes in Ownership: Ray and Margie Roloff purchased the theater, renamed it the Schuy-Ville, and changed the marquee. They continued showing movies on the weekends, and constantly upgraded the facility during the nine years they operated it. David Grate operated the theater for a few years, but it eventually closed and was again put up for sale. Realizing that a movie theater was a definite asset for the community, a group of local citizens formed The Princess Theater Corporation and sold stock with the purpose of purchasing and re-opening the theater. The name “Princess Theater” was restored and work began on the many repairs needed. A new screen, surround-sound system and stage curtain were purchased, the building was re-wired, new lights and air-conditioning were installed, a sagging beam was repaired and the marquee was upgraded with new neon tubes. On September 8, 1995, the Princess re-opened with Marie Wallace as manager. The first movie offered was “Apollo 13”.

The Princess Theater Foundation: In 2013, The Princess Theater Corporation became The Princess Theater Foundation, a not-for-profit 501©(3) organization. The movies shown at the Princess are generally family or children oriented, however in late 2017 the board voted to begin showing select quality or historically accurate “R” rated movies in an effort to generate much needed revenue. The Princess relies on free will donations, concessions, and gate admissions to fund its operating expenses. The Princess received another much needed renovation in 2013. Since movies are no longer sent on film reels, but are digital files ingested from hard drives, there was a need for new digital equipment, including a projector system, screen and sound system. At that time, the roof was replaced, new seats and carpeting were installed, the lobby was painted and the restrooms were upgraded. The Princess now seats 245 with additional spaces for handicapped accessibility. An anonymous benefactor graciously provided funds for these projects so Rushville and the surrounding communities will be able to enjoy entertainment at the Princess Theater for years to come!"