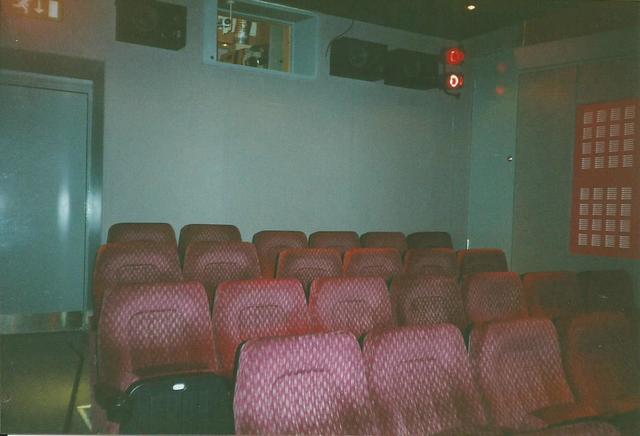 This Edwardian-era Swiss-Gothic style building was originally built and opened in March 1910 as a Town Hall, but was never used as such. It had a flat maplewood floor and was first used for roller skating, then became the Town Hall Cinema from 1912.

In 1932 it was re-named Carlton Cinema and seating was on one level. In around 1957 when CinemaScope was installed major alterations were made, the most significant of which was the reversal of the auditorium. The current screen end by the entrance to the auditorium was originally the rear of the auditorium.

Operated by Reeltime Cinemas, it was re-furbished to modern standards. In 1998 a second screen with a seating capacity of 55 was added in what had previously been a shop unit. Since then a third screen has been added. In January 2010 it was taken over by Picturedrome Electric Theatre Company.

The building is Listed Grade II.

I am sad to report that Reeltime Cinemas Ltd has gone into administration and the future of the Carlton is now hanging in the balance. It could close down unless a buyer is found, let’s hope that somebody steps in to keep it open and save this historic cinema.

This video, shot in 2002 during happier times, has just been posted on youtube by Fred J Fullerton aka fp30e. It’s well worth a look.

Westgate’s Carlton Cinema has now been reopened under new management.

Well, that IS some good news for the new year.

The company who now owns the Carlton is Westgate Investment. I paid a visit to the cinema a few weeks back and it really is a lovely venue. I watched The Wolfman starring Anthony Hopkins in the intimate 32-seat Bijou Screen, which was added to the site along with the 56-seat Century Screen in 1998 by Reeltime Cinemas. The Carlton was that company’s first cinema, which was acquired by their Managing Director, Mike Vickers, in about 1977. I had a chat with the staff while I was there who told me that business is slowly starting to pick up again but one of the problems is a lot of people think that the Carlton is still closed but it is well and truly open and it deserves the public’s support.

On checking the cinema’s website, it appears that the Premiere Screen (the largest) is currently out of action and undergoing repairs.

On checking the cinema’s webiste again, the main screen (Premiere) is now back in operation.