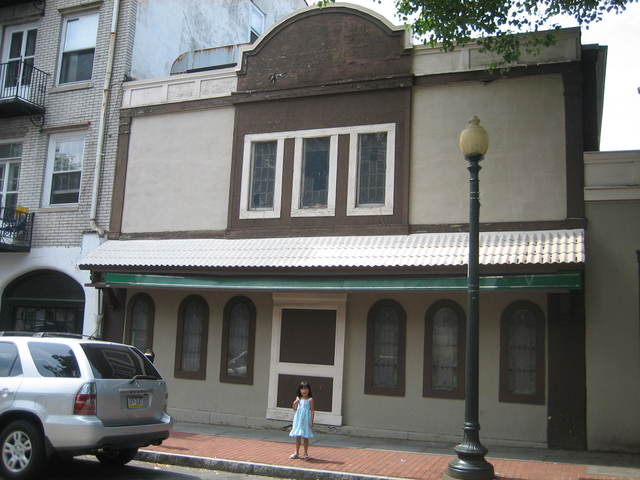 The Idle Hour Theater was opened in 1919. Around 1930 it was renamed New Garden Theater and continued with this name until at least 1950. A fire in the building next door closed the theater until its reopening on February 10, 1954 as the Harrison Theater. This theater played second run movies and closed in the late-1960’s or early-1970’s. The Warner Theater was the first run theater in town. I saw “The Blob” here when it came out.

I lived in West Chester from ages 4 through 8, from 1967 to 1971. I remember going to the Harrison only once, maybe in ‘67 or '68, before it closed for good, probably around 1969 or 1970. By the late 60s, the Harrison’s reputation around town was not good. It wasn’t well maintained, was kind of rundown on the outside, and there were rumours of rats running around the auditorium. I recall my mother taking me to a nature film of some kind, possibly a reissue of Disney’s WHITE WILDERNESS, in '67 or '68. Nothing distinguished about the interior—sloping wooden floor, very old seats, some of which were broken. By the time I saw a film there (again, 1967/'68), the writing was on the wall for the Harrison. Too bad, because it and the Warner Theater on High St. were the only 2 movie houses in downtown West Chester. A jewelry store went in to the Harrison’s old space for awhile, and as of this writing, summer of 2007, the facade of the old Harrison still stands, but the interior has been taken over by a chain pharmacy next door. I’ll post a picture of the facade when CT gets its photo link up and running.

There should be an aka of Garden. This is from Boxoffice in February 1954:

The Harrison in West Chester, formerly known as the Garden, has reopened with a complete Cinemascope installation.

Didn’t the Warner Theater on High St. have an Egyptian motif? I went to college in West Chester. I remember the Harrison being nondescript and on the way out even then, circa 1965. I remember seeing A SUMMER PLACE at the Warner.

Almost 4 years after I posted my original comment, the facade still stands, the front entrance boarded up, window poster niches boarded up as well. The chain pharmacy is now closed; it’s space, which had occupied the auditorium of the Harrison stands empty for now. I may be wrong about having seen White Wilderness there. It may have been another Disney, or G-rated film about wild animals in the arctic.

I recently visited my hometown of West Chester in September, 2011. I moved from West Chester in July 1965. I went to the site of the old Harrison Theater that I frequented when I was a teenager. I was surprised that the building bears a little resemblance to the original building as shown in the picture. The visit brought a lot of memories of the Harrison that I will share with readers. During the period of about 1960 to 1964 I would go to the Harrison to see a movie on weekends. I knew the manager, Jack, who managed and operated the theater. I met Jack because he was a customer on my paper route and he would occasionally give me free passes to get in. I was intrigued by movies theaters at that time and had visions of being a theater operator someday. During the period of 1960 – 1964, I would estimate “Jack” to be about 50 -60 years old at the time. I knew Jack managed and operated the theater, but I did not know if he owned it. I learned how to run a theater, or more correctly, how not to run a theater by asking Jack questions. Jack would let me climb the ladder to the projection booth to see the projectors in operation. The movie presentation was terrible, missed reel changeovers, screen going black because Jack did not keep the carbon arc lamp tweaked up. More than once, I observed the screen going “white” when film ran out of the projector and Jack was climbing the ladder in a hurry to fix the problem. The seats were in need of repair, but Jack made no effort to fix them. The restrooms were so small that they could only accommodate one person at a time. This was usually not a problem because the theater had few customers. The tickets issued at the box office had “Garden Theater” printed on them instead of Harrison. I guess the tickets were left over from the Garden Theater days. I wonder when the name changed from Garden to Harrison. Sometimes there was an usher that took your ticket and sometime there was not. Popcorn was dispensed from a machine for a dime. Soda and candy was available from machines. The Harrison showed many “B” movies, but occasionally had first run movies. Cleopatra was shown at the Harrison. An auditor showed up to count tickets sold and very few people showed up for the matinee showing. Spartacus was a road show movie complete with intermission. This was the only time I recall that the house was nearly full. When intermission came, people filed out onto Gay St. The 2nd half started after a few minutes without warning and people had to find their way back to their seats during the show. As I said, presentation was terrible. I have always wondered how and when the life of the Harrison Theater ended. I was amazed how long the theater stayed in operation with the Warner Theater around the corner drawing most of the customers. Today, downtown West Chester is a totally different place then it was 50 years ago. I wonder if the Harrison was alive today, as an independent theater showing independent films, could it survive in West Chester.

The Harrison closed in the late 60s or early 70s. West Chester closed the “steam plant” which provided heat to a lot of downtown buildings, including the Harrison. I last saw Jack in the parking lot behind the Harrison; he recognized me as a theatre “regular” and told me the sad news.

glcody26, do you recall what year you met Jack in the parking lot? I had no idea the steam plant was the cause of the theater closing. Do you think the Harrison would have stayed open if the steam plant had not closed? Feel free to email me at . Maybe you have some more information that you would be willing to share.

I saw Jack in the lot about 1970, give or take. He said he would not be able to heat the building without the steam heat and was throwing in the towel. I doubt the Harrison had much life left in it, regardless. I still patronized it, but there were maybe five or six people there for a show. It was only a matter of time until the carbon arcs burnt out for good.

The Harrison opened as the Idle Hour Theater in 1919. A name change several years later, with the advent of movie sound, to the New Garden Theater was accompanied by disaster. A hotel fire next door caused a closing of the theater because of water damage. It remained closed until 1953 when it was renovated with all the new innovations of the time, like Cinemascope and stereophonic sound with the then new Altec 800 speaker system plus complete renovation of the front, marquee, lobby and auditorium. On February 10, 1954, the new look Harrison, nee the Idle Hour, nee the New Garden, opened with the Cinemascope production “How to Marry a Millionare”.