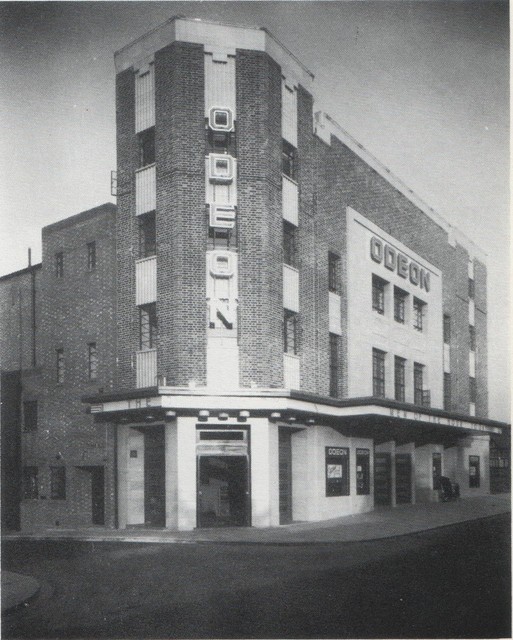 Located in the north London district of Southgate. Opened and operated by Oscar Deutsch’s Odeon Theatres Ltd. chain it was actually taken over by the company during construction, hence the rather unusual choice of architect Bertie Crewe, who was better known for his live theatre designs rather than cinema design.

The Odeon opened on 16th October 1935 with Edward G. Robinson in “Passport to Fame” (aka “The Whole Town’s Talking”). Externally it was was solid looking building, located on the corner of The Bourne and Tudor Way. The main feature being a corner tower feature which actually only towered slightly above the height of the front facade. In the auditorium seating was provided for 810 in the stalls and 628 in the balcony. There were stylised ‘cube’ figures in recesses on either side of the proscenium that were back-lit and similar panels of ‘cubed’ figures along the side walls. Illumination was via troughs of concealed lighting across the ceiling. The cinema was equipped with a large stage and dressing rooms. There was also a cafe/restaurant and a large car park.

The Rank Organisation closed the Odeon on 9th September 1972 with Steve McQueen in “Junior Bonner” and Stanley Baker in “The Last Grenade”. The building was shuttered for over three years until it was leased by an Independent operator Windsor Entertainments who re-opened it on 26th December 1975 as the Capitol Cinema, using only the stalls area. Later the balcony began to be used again but attendances were falling and it closed on 2nd January 1981 with Clint Eastwood in “Any Which Way You Can”. The building lay empty again and despite efforts by locals, no future use could be found. It was demolished in September 1982 and an office block named Hobart House was built on the site.

An exterior view of the Odeon, photographed in 1949:
View link

A closer view from another angle, photographed in April 1971:
View link

Ahh, THIS was the one my Mum said was at the Bourne!