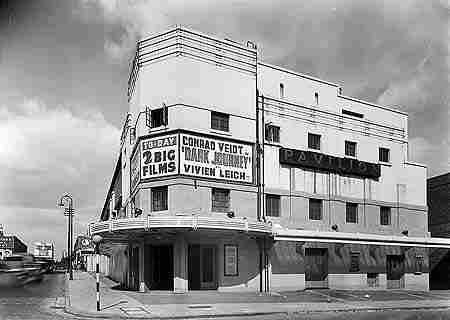 The Electric Pavilion Cinema opened on 19th November 1914 and was located on the corner of Chamberlayne Road and Bannister Road in the northwest London inner city district of Kensal Rise.

The architect of the building is given as George Duckworth and it had a seating capacity of 800. In 1924 it had become the Pavilion Cinema and architect Cecil Masey had been brought in to modernise and expand the building. It now had seating provided for 1,039 in the stalls and 461 in the balcony. By 1936 it was listed as being operated by General Cinema Theatres Ltd and known as the New Pavilion Cinema. From 1st July 1937 it was taken over by the Oscar Deutsch chain of Odeon Theatres Ltd. and it was re-named Odeon in 1940.

The Rank Organistion closed the Odeon on 2nd May 1970 with Robert Redford in “Tell Them Willie Boy is Here” and Don Knotts in “The Love God?”. It was sold by the end of 1970 and was demolished. A garage/petrol filling station was erected on the site. This had been demolished by 2012, and a block of flats had been built.