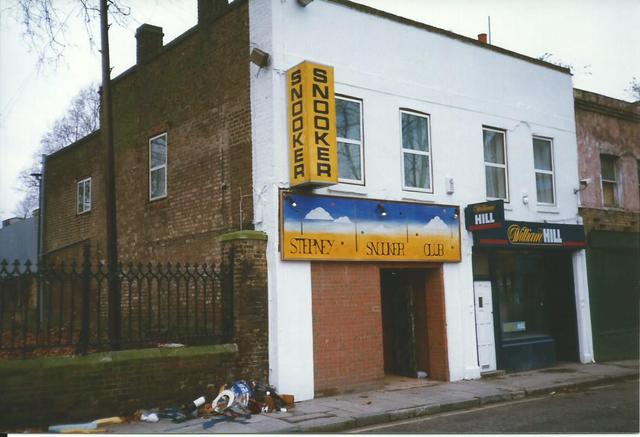 Located on White Horse Road, a side turning off the north side of Commercial Road in the Stepney district of east London. The Palacedium Cinema opened in 1913 and was operated as an independent by Messrs. Prideaux & Son. Seating was provided on one floor. By 1917 the cinema was owned and operated by a gentleman with the name Ben Hur. In 1948 it was re-named the Ben Hur Cinema after the previous owner and continued for many more years as an independent local cinema.

It closed on 6th May 1962 with John Wayne in “Jet Pilot” and Fred MacMurray in “Quantez”. It was converted into an independent bingo club which closed in the mid-1980’s and since then has been in use as a snooker club named the ‘Stepney Snooker and Social Club’. The snooker club closed in 2007, and the building was demolished in 2008 with housing units built on the site.

The name BEN HUR CINEMA survived painted on the side wall of the building for many years after closure.

I’ve been researching London cinemas pre-WWI (there’s a database available at http://londonfilm.bbk.ac.uk)) I found records of the Palaceadium in film trade books covering 1914, one of which gives the owner as Palaceadium Ltd, the other as Ben Hur, which indicates he was running the cinema pre-WWI. There’s a memoir of going to the cinema at this time in Ben Thomas, Benâ€™s Limehouse: Recollections by Ben Thomas (London: Ragged School Books, 1987), p. 43. I’d heard tale that he got his name after success exhibiting the 1907 film Ben Hur. Is this true, and what was his real name? Luke

The cinema got its (2nd) name from Ben Hur (this has nothing to do with the Back & White silent film of that name). Henry Ben Solomon was a market trader, there was a bully in the market who was a British boxing champion. The market traders decided between them in a meeting, that the next person to be bullied by this boxer would have to stand up and fight the guy. The next person after that meeting who was bullied was my Great Grandfather. He was too old to fight this guy, so my Grandfather (Henry Ben Solomon) said he would fight him instead.

A bare-fisted fight was organised (this was illegal in those days, so it was held underground in the drains). In those days a knock down was considered one round. After 77 rounds, Henry emerged as the winner, having beaten this guy to a pulp, however Henry sustained some injuries in the fight and had to go to hospital. While in hospital, he was visited by a theatrical agent who convinced him, that with this story he could make Henry famous and that they should go on stage with an act.

Henry decided to do this and chose the stage name Ben Hur (he had an stage act named Pompey). Before long he was billed as ‘The World’s Strongest Man’ and even managed to last 9 rounds with a Sumo wrestler. As the act became popular Henry started buying some businesses (one of which was the Palacedium Cinema, Stepney). As Henry was known throughout the East End as Ben, the cinema was naturally re-named Ben Hur Cinema.

Soon the family name Solomon, was changed by Deed Poll to Hur. Ben Hur was a very generous man, donating much money to charity, and the London Hospital, Whitechapel. Ben died in January 1960, three weeks before my birth (hence I was given his name).

Ben had lived the remainder of years in Preston Drive, Wanstead. E11, where he bought the first two houses built in that road. Ben’s sons were named; Jack, Richard, Louis, Alfred and John, his daughter was named Sadie.

Ben was a great man and is sadly missed by his family and all who knew him.

My name is Maud Smith nee Jeffries,I spent many many hours during the Thirties & Forties in the Ben Hur Cinema. My parents took over the Fish & Ring public house when Ben & his wife left to run the Cinema.I would love to speak more to the Hur Grandsons as I knew all the five sons very well especially John as he was closer to my age.Is there anyone who attended the early evening showing of films at the Mission Hall in Commercial Road,it was known as the Penny Pictures- that was the cost of a ticket. Micky Smith.

My name is Karen Evans emailing from Christchurch, NZ. My father, Edward Evans (born 1928), and his four brothers had an uncle in the 30s and 40s who ran the Fish and Ring Pub, the Ben Hur cinema and, I think, also a local fish and chip shop. As we are researching my Dad’s childhood, I would love to make contact with any of the above. .nz

My late father, Bob Hoadly, who was born in Whitehorse Road (or Street as it was then) often spoke fondly of this cinema – his local. A bit of a flea pit, I understand, but much beloved! Micky Smith, who posted above, sent me a link very recently, to a marvellous film, presumably commissioned and presented by Ben Hur himself, who features with his wife, and I presume sons, prominently in the film. Made to celebrate the Silver Jubilee of 1935, it paints a vibrant picture of a long-lost East End. It is wonderful, and and is now available to view at the BFI Player site via this link:

Did it ever screen Ben Hur(silent version or 1959 version)?