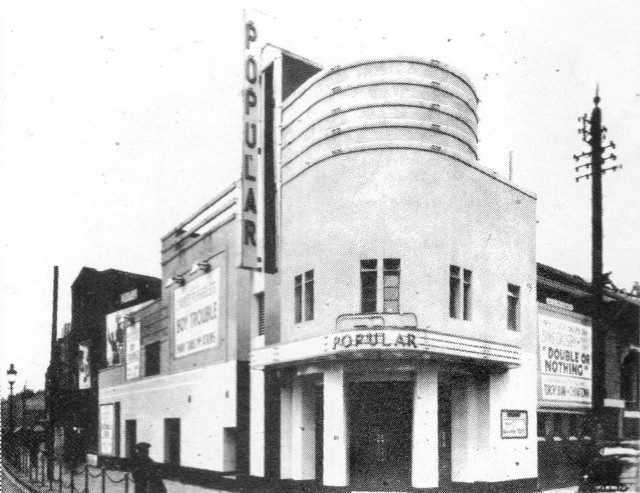 Located in the inner east London district of Stepney, on the corner of Commercial Road and Ratcliffe Cross Street. The Popular Cinema Theatre was opened in February 1913. It was the first cinema designed by the architectural firm Adams & Coles, and had a decorative facade. In the 1920’s it was operated by Hyams & Gale who later built the huge Troxy Cinema in Stepney, just one block away on Commercial Road.

In 1938, the owners brought back noted cinema architect George Coles (a partner in the original architectural firm), who gave the Popular Cinema Theatre a new Art Deco style facade, and it was re-named Popular Cinema.

The Popular Cinema was closed on 13th June 1959 with Max Bygraves in "A Cry From the Streets" and Dean Martin & Jerry Lewis in "The Stooge". The building was later demolished and the site redeveloped. In the summer of 2008, a new building was erected on the site which houses a Sainsbury’s Local supermarket and flats.