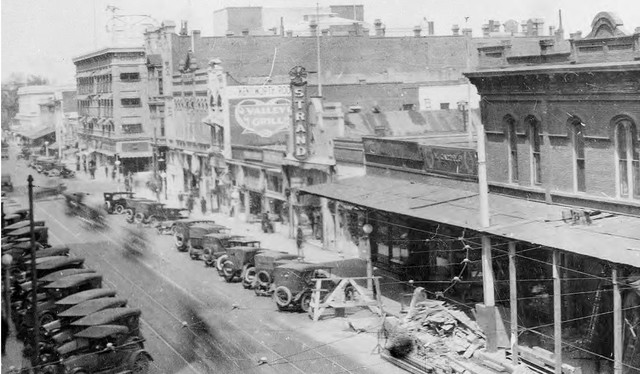 Opened as the Fresno Photo Theater.

Here are a few 2011 photos of what I’m sure used to be the Strand – based on the interior (drop ceiling which is probably hiding the original ceiling) the marquee and other exterior characteristics. This setup reminds me of something I saw in Downtown LA.

Here’s a recent photo…
And another…

Well, I’m 80 years old and lived in Fresno for many years. It was the Warnor’s as far back as I can remember and we moved to Fresno when I was fourteen. I worked there as an usherette when I was about 16 or 17. It was very beautiful inside…lots of plush red carpeting. The Loge seating was very soft and comfortable.

OldJody: You were seeing Warnor’s Theatre in the Street View photo because the 1100 block of Fulton Street is a pedestrian mall and not accessible to Google’s camera truck. The Strand was an entirely different house on Fulton Street south of Fresno Street.

Google would have done better to show the view at the corner of Fulton Mall and Fresno Street. I’ve adjusted Street View to that location and updated it, to prevent further confusion. The Strand would have been on the left side of the mall as you look south from Fresno Street. The pin icon on the Google map is still in the wrong location, at Tuolumne Street.

I’m not sure how long ago the Strand was closed. The only photo I can find showing a Strand Theatre in Fresno is this one, taken way back when Fulton Street was still called J Street. I’m not even sure it’s the same Strand Theatre, as everything on Fulton Street has changed since then.

I wonder if The Strand is the original name for the Fulton Theater at 1139 Fulton.

Correction to above comment. The Strand was across the street from the Fulton and was originally known as the Fresno Photo Theater. The original operators left it to fight in World War 1.