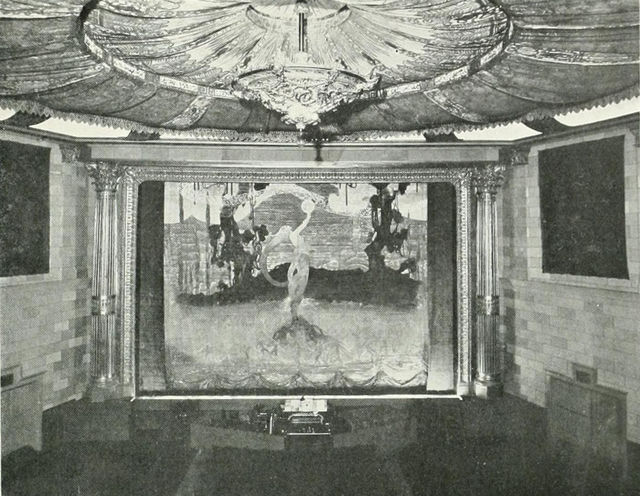 The Kinema Theatre was in operation from 1913 until it was destroyed by fire in 1919. It was designed by architect G.H. King.

A new Kinema Theatre was built on the site, designed by architect G. Albert Lansburgh which opened in 1920 and closed in 1954. It was torn down in December 1957.

The old Kinema Theater building at 1211 Fulton Street, once one of Fresno’s plush entertainment palaces, is being demolished to make way for the $600,000 S. H. Krsss & Company store. The Kress company purchased the property last May from Abraham C. Schnee of Beverly Hills at a cost of $300,000. For many years it was owned by the Reading Estate Company of San Francisco. Two small shops on either side of the theater are included in the demolition project.

Oldtimers recall that the theater structure was erected in 1913 and was opened with a glamorous celebration by Mayor A.E. Snow. He pushed the button which turned on an unheard of electrical brilliance. The ushers were clad in evening dress. Every one of the 1,400 seats were occupied that November night as thousands of multi-colored serpentine rolls were tossed into the air. The mayor predicted Fresno’s great future growth. Emil Kehrlein was the theater manager and part owner.

In 1924, during the 11th anniversary celebration, Aimee Lynn Kilty was the organist. Few of thie patrons then, with their interest concentrated on the outcome of the hero’s fight for his girl, realized what a big part the musician played in providing the heart flutter and the spine chills as the play progressed. The organ was installed at a cost of $30,000 and could be made to produce, with the aid of its many pipes, an enormous multiplication of sounds.

Stage shows began in 1925 and included the University of California Glee Club, Fanchon and Marco revues and a permanent 12 piece orchestra when the Fox West Coast Theaters leased the theater. Similar attractions were billed by the Liberty Theater, also operated by Fox West Coast.

A compound cooling system was installed which kept the inside temperature at 56 degrees when it was from 116 to 120 degrees on the outside. In 1929 the Kinema first presented the new “talkiesâ€.

The Fox West Coast chain took back the operation of the theater early in 1934. It has been closed for nearly three years. For a while it was used by a church youth group.

The March 14, 1953, issue of Boxoffice said that the renovated Rivoli, formerly the Kinema, had been reopened by Gerald Hardy. It was to be operated as a first-run house.

Click here for a photograph of the Kinema Theatre taken in 1930 by George Mann of the comedy dance team, Barto & Mann.

Two cards in the L.A. Library’s California Index cite articles that raise questions about the reported history of this theater. The 1913 Kinema might have been expanded, or replaced by a new building, in 1920.

A May 24, 1913, item in Southwest Contractor and Manufacturer says that San Francisco architect G.F. King had prepared plans for the $35,000 Kinema Theatre, to be built on J Street (since renamed Fulton Street) in Fresno.

A January 30, 1920 item in the successor publication, Southwest Builder & Contractor, said that Albert G. Lansburgh would prepeare plans for the $200,000 Kinema Theatre which was to be built at 1317-1321 J Street in Fresno.

I don’t know what the conflicting address is about (perhaps it was an error by the magazine), but a 1920 report of a Kinema being designed by Lansburgh, coupled with the low cost of the 1913 Kinema, suggests that either there were two theaters of this name in Fresno, or that Lansburgh’s design of 1920 was for a major expansion of the original 1913 theater. I’ve been unable to find any clarification of this mystery on the Internet. Fresno newspapers from 1920 might provide the answer, if somebody has access to them.

I should add that the theater in the 1930 photo linked in Brad Smith’s comment above does not look like anything that would have been built in 1913. The Spanish Colonial Revival style of the exterior was launched in California by the Panama-California Exposition, held in San Diego in 1915. By 1920, the date of the Lansburgh design for the Kinema, it was all the rage.

I wasn’t sure this was a photograph of the Kinema Theatre. If not the Kinema, is it possible it’s the White Theatre?

Photo of outside from Pop Laval on facebook
View link
David
aztecatheater.com

I’ve finally discovered what happened to the original Kinema Theatre designed by G. H. King and opened in 1913, and why it was rebuilt in 1920. Here is an item from the July 21, 1920, issue of Building & Engineering News:

“FRESNO, Fresno Co., Cal.— The immediate rehabilitation of the Kinema Theatre is planned, according to Frank Purkett, Manager. The structure was recently destroyed by fire with a loss of approximately $75,000.”