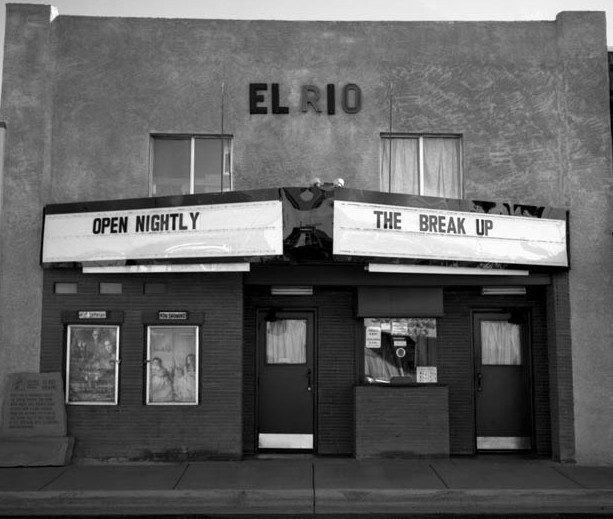 Built in 1913 and opened in as the Apache Theatre in 1915, this tiny theatre has survived the ravages of time quite well. Most of the theatre’s seats are original from the 1930’s. It was renamed El Rio Theatre in 1937. Even the theatre’s popcorn machine dates back to the 1950’s. It was closed on January 3, 2014 on the death of its owner.

It reopened on July 4, 2014 after being purchased from the estate of the previous owner, and is privately owned and operated. It is equipped with the latest digital projector and Dolby sound system.

The El Rey Theatre in Springerville, AZ in 1946-1947 was operated by the Louis F. Long Circuit, one of the largest independent theater circuits in Arizona.

There is only one theatre in Springerville, Arizona. It was built in 1913. When it was built, it was called the Apache Theater. It has never been called the El Rey Theatre. It has only had two names, Apache and El Rio.

I know this because I ran the theatre for 10 years. I just resigned a few months ago.

In 1963, the El Rio was still part of the Louis F. Long chain. The 1963 almanac list about thirty Long theaters at that time in AZ.

Yes, it had been owned by the Louis F. Long chain, but was never named the El Rey. There must have been a typing error or something. It has been El Rio for at least 70 years.

Before that it was called the Apache Theater

Here’s a 2006 view of the EL RIO – nice theater.
http://www.rushcreekgallery.com/lfop/index.html

This theatre closed upon the death of the owner of January 3, 2014.

Roger Katz, evidently it’s still open according to their website with current attractions.