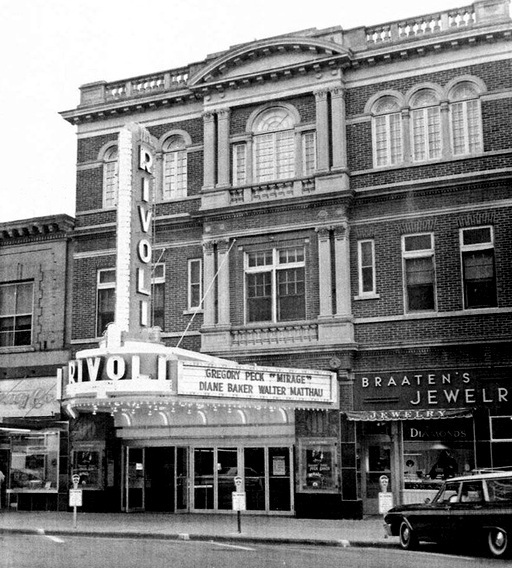 The B B Theatre was opened September 6, 1916 and operated as an opera house. It later went over to Vaudeville and movies and was renamed Rivoli Theatre February 4, 1922. The Rivoli Theatre was closed as a movie theatre on November 16, 1975. In 1977 it was converted into a shopping mall named Albert Lea Art Center.

According to this article it closed in 1978.

Here is a 1925 postcard showing the Rivoli on the right:
http://tinyurl.com/hs9uf

Here is a 1940 photo of the Rivoli:
http://tinyurl.com/lfvog

The article posted in Feb 2003, is about the Broadway theatre. This large house is located a couple of blocks from the Rivoli. The Albert Lea Art Center is indeed located in the former Rivoli theatre, not the Broadway.
The Broadway building was still standing as of Nov 2006, although mosting vacant.

The old Rivoli Theater, which disappeared from view behind a cocoon of plywood and plastic in the beginning of February, reemerged this week, transformed into a new, nearly completed mini-mall.
The brick and white stucco arched front of the mall reflects the architecture that will be used throughout the mall when the construction is finished.
Inside where will be space for seven shops, said Ken Keesling, manager of the mall. So far there has been one definite commitment for a rental and five which appear likely.
Among the five are a boutique and a record and stereo store, Keesling said. He declined to say what the other stores will be until the decision that they will move in is more definite. “I’ll just say that there will be seven very unique retail outlet stores there.” he added.
When the mall is completed all the shops and the main hallway of the mall will be carpeted in brown to complement the stucco and brick work. The interior is laid out along a central corridor with shops off to either side. Along the corridor will be arched doors to each
store and arched display windows. Above each window, white stucco fills the curved top portion of the windows and doors.
Turning the old theater, with its slanted floor and giant stage into a mall was not an easy construction job, according to Eugene Langlie, foreman of the Sahr Construction team building the mall.
“There was a lot of work demolishing the old stage.” he said. “Underneath it was about 14 feet of space filled with a boiler and heating blowers, and all that had to come out."
When the stage was dismantled and the heating machinery removed "there were still two giant beams that had been part of the top of the stage that were left up there about 20 feet off the
ground. We had to get those out too.” Then “we had to open the back
up and bring a Cat in here to level the floor.” he said. A hole was cut in the back wall of the theater and a bulldozer driven into the building to move the tons of sand that now fill the back of the theater so that the floor is level with the front.
After the ground was leveled, a cement floor was poured, and when it dried, scaffolds were erected and wires that will support a hanging ceiling were installed in the ceiling two stories above the new floor.
“The wires for the drop ceiling hang down over 20 feet,” he said. The ceiling itself, however, has not yet been installed and the old theater ceiling can still be seen high above the workers.
Although there is still space to install a second floor above the mall, Langlie said that no plans for construction of that nature have been made.
The balcony of the old theater, however, might be used for another shop if the mall owners get a solid commitment from a store keeper to move in there. So far they have none, and so renovation of the balcony will have to wait, he said.
All of construction, electrical and plumbing work will be finished by mid-April, Langlie said.
In addition to the shops, public lavatories will be built in the front of the mall.
The total cost of construction for the mini-mall will come to about $100,000, he said. Considerably cheaper than building even a mini-mall from scratch, he said.
Langlie, who has worked as a construction chief on a number of full-sized malls, said the minimall will be a “very attractive shopping area” when it is completed.
The front of Braaten Jewelers, which is adjacent to the mall, will also receive a brick and stucco arch facade, and a wall between the mall and the jewelry store will be removed and part of the store expanded into the mall.

I’m confused. Is the old Rivoli theatre a shopping mall or the Albert Lea Art Center?

The former Rivoli Theatre is the Albert Lea Art Center which is a Antique Mall. The mall features craftes, art work and other shopping.

The B B stood for Beatrice Bessesen, an opera singer. The building was originally the Bessesen Opera House. I don’t know when exactly it started showing movies. The building currently houses a gallery, a chiropractor, the local arts council, and various other businesses. There is an initiative to restore the building, but no word on whether the ugly ‘70s front will be replaced.