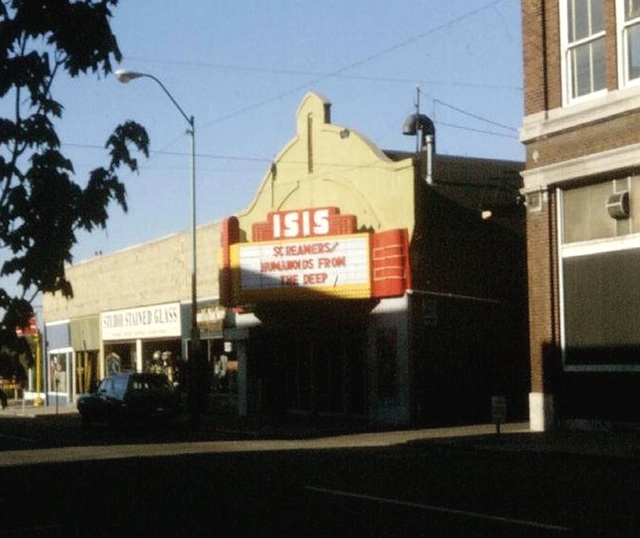 The Isis Theatre was opened in 1913 as a movie theatre. It was equipped with a pipe organ. It was closed in the mid-1980’s and was demolished in 1989.

Here is a February 1941 ad from the Kokomo Tribune:
http://tinyurl.com/38syge

The owner are listed as

It is listed as closing in 1982 but I don’t know if that is correct. I’m told it stood closed a few yaers before being torn down.

The Hudson Theatres listed as the last owners I don’t know if it’s the same one that had a few theatres in the southern part of the state. If it is then it was part of the Hudson/Kerasotes mob and as bad the Kerasotes mob is I heard Hudson was worse.

When George Kerasotes left to start his own company he had to take his own brothers to court because when they split up the company they took new equipment out of the theatres George was getting and put it in the older ones they were keeping and putting the old equipment in his theatres. After he won the first lawsuit there were more theatres added that had to be divided and they did the same thing. He had to take them back to court and it took years to settle.

I know that when George Kerasotes died it was said that he wasn’t good enough to get in heaven and to evil for hell and he was in limbo somewhere.

I have many fond childhood memories of this place. It had a balcony which was closed off. The last movie I remember seeing there was Creepshow, which was released in November 1982.

A May 11, 2006 article in the Kokomo Tribune says that the Isis Theatre was built in 1913. It was exclusively a motion picture house, and one of three Kokomo theaters to have a pipe organ. It was the last downtown theater operating in Kokomo, closing in the 1980s. The building was demolished in 1989 after having been vacant for some time.