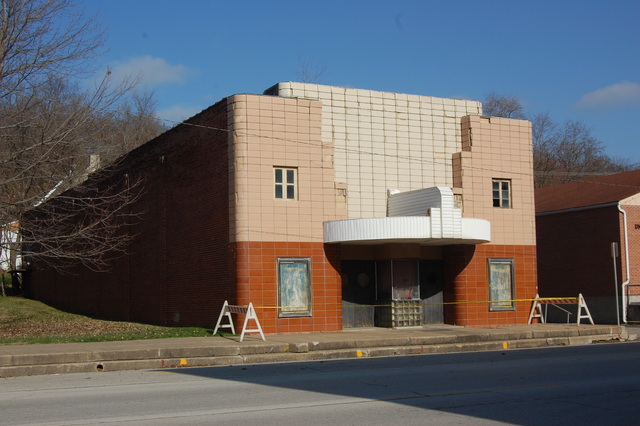 The El-Jon Theatre opened in March 1945. This small town theater closed in 1960 and became a bowling alley. It was demolished in 2012

The El-Jon Theatre opened on March 23, 1945. There were 472 seats. It was designed by Kansas City architect Al Hauetter, who also designed the NRHP-listed Burlington Opry in Burlington, Kansas. He gave the El-Jon Theater a simple, streamline moderne facade of ceramic tiles in shades of rose, cream, and granite red.

The walls of the auditorium were covered with acoustic tiles laid in a pattern of light coral and buff. A ceiling tray held indirect lighting as well as the outlets for the air conditioning. The seats had plush upholstery, and the aisles featured the same carpeting as was used in the lobby.

An unusual feature of the new house was a basement recreation room with a juke box, cold drink bar, and a dance floor. This was called the Fiesta Room, and was decorated in bright colors with a Mexican theme.

The El-Jon was featured in an article in Boxoffice Magazine, July 21, 1945. The house was built for Mr. and Mrs. Elmer Bills, whose Roxy Theatre in Brunswick had burned to the ground in 1943. The new building was built of fireproof masonry.

I may have the street wrong. I don’t recall where I got the original information, but there doesn’t appear to be a Main Street in Brunswick.

I just spoke to my cousin Carolyn recently and they have torn down the El Jon theater. When I was a kid, I remember seeing “Beneath the Planet of the Apes” there. Was a wonderful old theater. My cousin told me that in the basement, they had an old dance floor and it seems it was used quite a bit in the 50’s and 60’s. Very sad to hear that it is now gone.