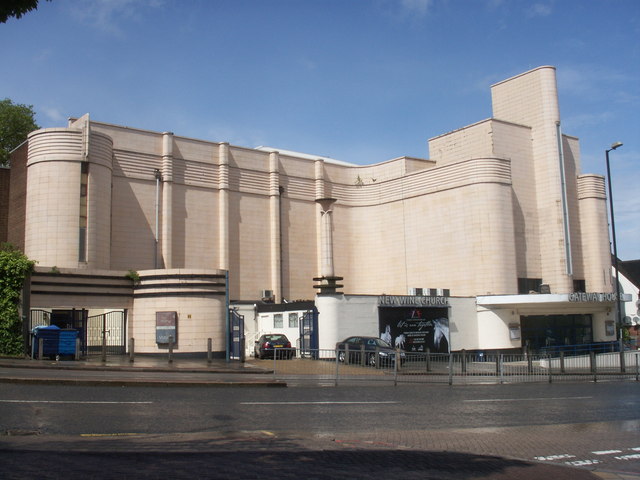 Located in the southeast London district of Woolwich. Opened as the Odeon Theatre on 25th October 1937 with Ralph Reader in “The Gang Show”. It was designed for the Oscar Deutsch chain of Odeon Theatres by architect George Coles who came up with a splendid streamline Art Deco style. The exterior looked stunning at night as it was outlined in neon tubing.

Inside the auditorium there were troughs of concealed lighting and a moulded plaster decoration on the splay walls in the form of a floral freize which had backlighting. Seating was provided for 1,178 in the stalls and 650 in the balcony.

It was modernised internally in May 1964, a process known as the Rank Organisation’s ‘zing’ treatment, which unfortunately stripped away all decoration to give a bland featureless space in the auditorium. It continued as the Odeon until closing on 17th October 1981 with William Hurt in “The Janitor” (aka “Eyewitness”) which screened in the daytime and Neil Young in the documentary “Rust Never Sleeps”, which was screened on a late night show. The building lay empty and unused for almost two years.

Independent film exhibitors Panton Films took over the building from 14th July 1983 and it re-opened as the Coronet Cinema with “Star Wars:Episode VI - Return of the Jedi”. It was converted into a twin cinema from 6th July 1990 with seating for 678 in the former balcony and 360 seats in the former rear stalls.

Many photos including one of the auditorium at flickr:
View link

And two contemporary exteriors – in the rain – January 2011