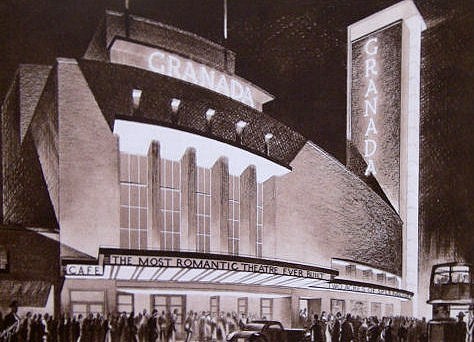 Located in the southeast London district of Woolwich. The Granada Theatre, Woolwich was built for and operated by Sydney Bernstein’s Granada Theatres circuit. It opened on 20th April 1937 with Will Hay in “Good Morning Boys” and Lew Ayres in “Lady Be Careful” and celebrity guests attending ‘in person’ included film stars Glenda Farrell and Claude Hulbert.

The overall design of the building was by architect Cecil Masey. An exception being the the façade of the building which was given a sweeping Art Deco style treatment by architect Reginald H. Uren. To the right of the entrance is a tall slab tower upon which was the name of the theatre. Inside the building, the decorative treatment is in a Gothic style (very similar but slightly scaled down) to the interior of the Granada Theatre, Tooting. All of the interior design was carried out by Russian set designer Theodore Komisarjevsky. Painted panels in various spaces on the buildings walls were by artist Vladimir Polunin. There is a Hall of Mirrors which served as a waiting area for balcony patrons and a café located on the balcony foyer.

The Granada Theatre was equipped with a full working stage which is 28ft deep with a proscenium opening 48 feet wide x 30 feet high. There was a Wurlitzer 3Manual/8Rank organ with grand piano which was opened by Reginald Dixon. The stage was used many times especially around the Christmas period when a pantomime would be produced and during the 1960’s when ‘one night only’ pop music shows were going around the circuit. The Wurlitzer organ was later removed and is now installed in Neuadd Pendre, a hall in Tywyn (Towyn), North Wales.

Initially the Granada Theatre usually played the ABC or Gaumont release film programmes (the Odeon across the road played the Odeon circuit releases). After ABC built their own Regal Cinema in 1955, the Granada Woolwich was left to play Gaumont and Independent releases. Bingo was tried out on mid-week nights from 5th December 1961 with films playing the busier weekends. It went back to full time film programmes from April 1965 until closure on 26th October 1966 when the final programme was an (X) certificate double bill, consisting of the ‘shocking’ documentary about ‘swinging London’ “Primitive London” and Heather Sears in “Saturday Night Out”.

It was converted into a Granada Bingo Club which opened on 30th October 1966. The building was Listed Grade II from 7th January 1974. It was taken over by Gala Bingo from May 1991. From 7th October 2000 the heritage listing was upgraded to a Grade II* Listed building.

The Gala Bingo Club closed on 30th July 2011. The building was sold after an offer was made which was too good for Gala to refuse (said to 5 million pounds) and a church purchased the building. Now known as the Christ Faith Tabernacle Cathedral, in November 2021 an Allen STR-4 Theatre Organ with a 3 manual console was installed.

I regularly saw films here as a child and I watched the Beatles film “Yellow Submarine” here. It was a wonderful cinema and its a shame its only now used for Bingo and not for films and live shows.

Interior photos of this movie palace, which I recently visited (though not my photos)

An achitectural rendering that was published on the opening brochure, plus a current photograph of the former Granada, and its Wurlitzer organ console:
http://www.ukwurlitzer.co.cc/2203.html

Interior photos taken in January 2011 can be seen here:–

The building is now owned by CFT Church group

I was given a tour of the building in 2009 and the receptionist gave me a copy of the booklet that appeared soon after the cinema opened. I shall be writing about my trip and will include many of the photographs on the PLAYING BINGO website at:

Watch the space – in the meantime, you can read about the Granada Tooting at the site:

Here is the churches website and the interior looks stunning-it appears to have been decorated,recarpeted and re seated both in the stalls and the circle. http://www.cftchurches.org/index.php/about-us/cathedral-gallery