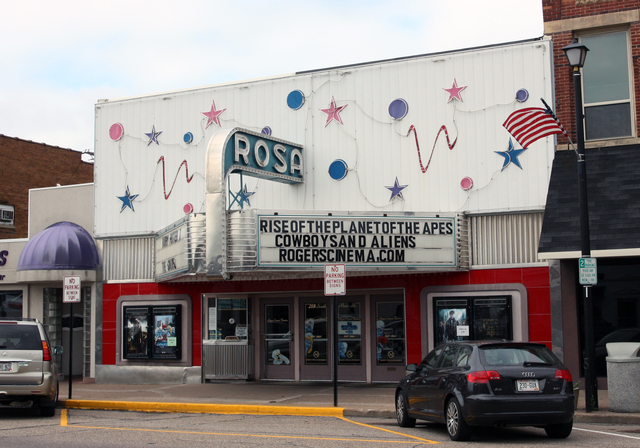 The Rosa Theater was built by John P. Adler owner of Adler Theater Company of Marshfield Wisconsin. The theater was named after his wife Rosamond.

Construction started in 1946 but was stopped because of legal restrictions and there was an error in the boundary lines.

It was originally a single screen with a seating capacity of 554.

My photos of the Rosa Theater can be seen at:

This is one of the theatres that was owned by Otto Setelle. I’m pretty sure I spelled his last name wrong. I met him in the late 90’s and he died a short time after that. Paul Rogers bought that theatre, which was a twin and added additional screens, and did some remodeling. At the time I met Otto he was a true showman. He had pictures of himself and movie stars located in the theatre. I think he was even wearing a tuxedo when I met him. I haven’t been in the theatre since Rogers bought it, but when Otto had it I thought it was a great old theatre. The marquee is particularly amazing at night.

The below link has for sale a book called “Showstopper” (Adler family and Waupaca theatres) $9.95

Flickr photo of the Rosa marquee illuminated at night.

Hi, Does anyone know if there were movies theaters, or other venues where movies were shown in Waupaca prior to the opening of the Palace Theater in 1920? Thank you, Leslie