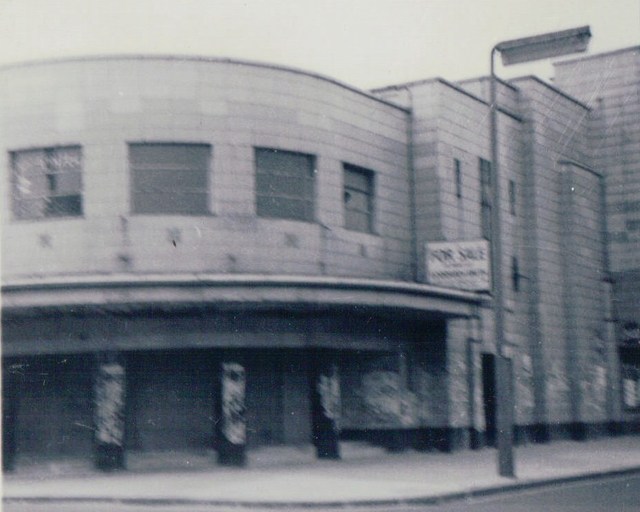 Built for and operated by the Oscar Deutsch chain of Odeon Theatres Ltd, the Odeon Theatre Wealdstone was located in what today is part of outer north west London, close to Harrow. It opened on 15th October 1934 with Jesse Matthews in “Evergreen”.

This was the fourth Odeon Theatre designed for the circuit by the architect Arthur Percival Starkey, who was locally based in Harrow. He was assisted by architect Fredrick Adkins and they created a rather long and low facade which was covered in cream faiance tiles and swept around the corner entrance. There was a short square tower feature which carried the Odeon name and inside this tower were the speaker chambers located behind the screen. There was a large cafe which was equipped with a grand piano for entertaining the diners.

Inside the auditorium, seating was provided on a semi-stadium plan (with no overhanging balcony). There were 880 seats in the stalls and 342 in the balcony. Decoration was in an Art Deco style with bands along the walls and ribs in the ceiling which carried indirect lighting.

This Odeon was one of only nine built for the Odeon Theatres chain that was equipped with an organ. In the case of Wealdstone it was a Compton 3Manual/5Ranks organ, the console was encased in an illuminated ‘jelly mould’ and was on a lift. It was opened by organist Henry Wingfield. The stage was 14 feet deep and there were two dressing rooms.

The Odeon Wealdstone led an un-eventful life and was closed on 4th March 1961 with Kieron Moore in “Dr. Blood’s Coffin” and Johnny Nash in “Take a Giant Step”. The building sat empty and unused for many years and was demolished in the early 1970’s. An office block named Marlborough House was built on the site.

A vintage photograph of the auditorium of the Odeon, photographed soon after its opening in 1934:
View link

As a teenager in the 1950’s I used to play the organ in the Odeon Wealdstone,regularly. I think it was a 2 manual 4 rank Compton : Tibia, Tuba, Flute and Diapason. However whis was over 50 years ago – I was a school boy at Harrow and I earned my first “professional” fees – 10 shillings a show there, and at the Odeon Swiss Cottage (a 3 maual Compton with Melotone) and the Gaumont, Camden Town (a 4 maual Compton – the top manual was a coupler manual with the Tuba available.) This was an unnusual installation with the console at the left side of the proscenium, coming out from behind a curtain at the press of a button.There were 2 chambers under the stage. The auditorium had fine, rich acoustics, which enhanced the magnificent organ sound. I recently (2004) gave some concerts in Australia including Melbourne, where the magnificent organ in Malvern Town Hall – which resembles town hallls in the UK, such as Southampton in the 20’s, has been built with parts from several British organs, including the Odeon Swiss Cottage. If I’m wrong I’m sure someone will correct me!

I was most interested to view these photos.It looked a fine cinema. I never saw it as a working cinema because I went to school nearby and by the time I saw it, it had closed. I do remember seeing a tramp asleep in what had been one of its emergency exits when it was disused and abandoned. But what beautiful lines it had. And a grand piano to entertain diners! By the time I was in my final class at middle school it was derelict and in a dangerous state and indeed we were warned by police not to use its interior as an adventure playground. And unfortunately I was severely punished because the teacher believed I had been inside it. The site is now an empty office block but I was thrilled when I saw what it looked like in its heyday. I suppose in those days a visit to the cinema was a treat and an occasion . Whoever supplied these photographs I would like to thank you.