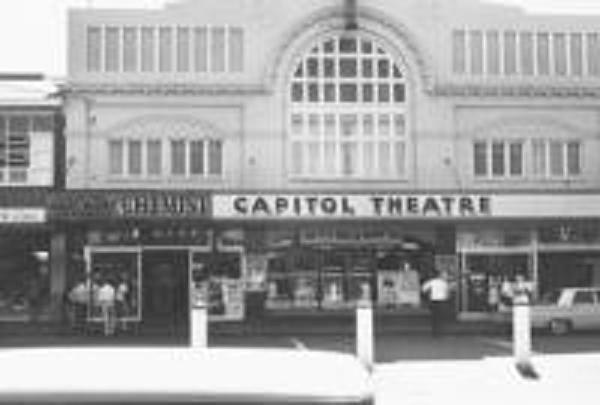 Once containing an attractive exterior, the Capitol Theatre was opened on 8th November 1924 with Ramon Novarro in “Ben Hur”. It had 1,400 seats in stalls and circle levels. In 1955, alterations were carried out by Scottish born architect George Rae.

It was closed on 10th March 1989 and was demolished, together with the nearby Regal Theatre. The site was incorporated into a shopping centre development that includes a multiplex cinema.

I saw the James Bond Film MOONRAKER here in 1979 and the theatre was very much in its original design, straight in off the street to deckchairs and flip up seats or upstairs to the ‘lounge’ and under the lattice ceiling. It was a good big old style 20s theatre and was comfortable and spacious. The screen was really big and the film looked very good. I went to the Regal the same week (see that site) and realised this cinema was much older but of equally interesting design.The Capitol was white and grey, even inside, like the colours you get on Hydranges plant. A lovely old fashioned but fully functioning cinema. What is there today is the usual ugliness, all made of boring concrete and pipes and painted lime green or pink or something mixed like that.

I remember seeing a few films there: Romancing the Stone, The Karate kid, and ‘Look Who’s Talking’ which was the last i saw there with the knowledge that it would be torn down. I remember canvas seating downstairs, and leather upstairs. from memory it was around $3 upstairs (child) and a $1-$1.50 downstairs. It is know an ugly AquaMarine building.

I lived in Coolangatta in the 70’s and the Capitol and the Regal Theatres were our locals. We owned a shop in Coolangatta too. I remember the Regal had hessen sling type chairs downstairs. It brings back wonderful memories. I was there from 1974 onwards.A great era!

Inevitable, but still sad. It was here I saw Elvis Presley in his first movie ‘Love Me Tender"; also saw Johnny O'Keefe and various other original Aussie Rockers live on stage. End of an era.

Hi there, I remember the Capitol theatre very well, my parents owned Moccas Snack Bar 69 to 79 and the Capitol was next door. The seating on the ground floor in the Capitol was hessian sling type seating except for the very back row which was the flip down seats. Upstairs in the lounge there were also the more so called comfortable seating!! Many many years (like 40 or 50) before I ever went there they use to have a piano up on or near the stage(screen) and some one used to play the music on the piano, silent movies I spose. I remember in 1975 JAWS was playing there for weeks I think it was about 6-7 weeks every night. There were many more box office movies but that one I remember very well, still cant get that music out of my head. They also used to have matinees there on Saturdays and also the school holidays, this was up untill the early or mid 70s. When Elvis died they played Elvis movies there for days maybe weeks.It was the best theatre and Mr Gerald Conaghan owned the theatre, such a shame the atmosphere has gone from Cooli now. The Regal theatre just down the steet had the flip down seating, I never went upstair so I cant tell you what was up there.The foyer was huge. Locals and holiday makers would go to the movies then after the movie they would go to the CLIMAX DISCOTEQUE which was on the other side of MOCCAS which is what I think RJS can remember, Aussie and International singers and bands, years later turned into the JET CLUB after being a POOL HALL called Pleasure Centre which opened in August 71. I think it was THE BEST ERA. Deb