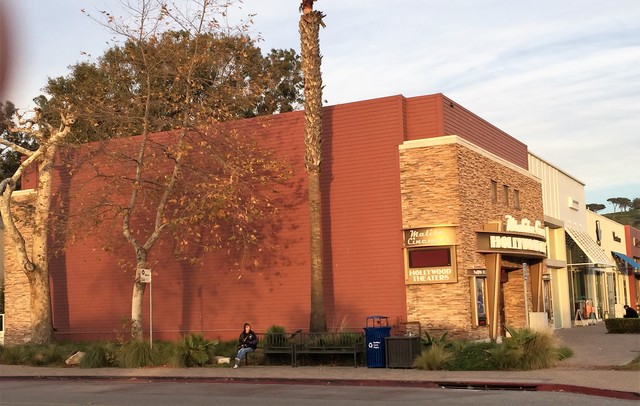 This twin movie house, which caters to the area’s rich and famous, is located in a strip mall along the Pacific Coast Highway. It opened in 1972 as a single screen cinema. In the past, Malibu’s film festival has held screenings here. On October 2, 1992 a second screen was opened.

Hollywood Theaters reopened this twin movie house (following renovations)in November 2006. In 2013 it was taken over by the Regal Entertainment Group. It was closed September 10, 2017. In 2019 it was being converted into retail use as a Fred Segal lifestyle store.

another close up view of the malibu cinemas. can been seen here
View link

The Malibu Cinema was a single screen originally, and was open during the 70’s. I would guess as far back as the early 70’s.

Brad is correct. Boxoffice Magazine of February 5, 1973, has an item saying: “Owner of the recently opened Malibu Cinema, a United General Theatres Franchise operation, is David O'Meara….” The house was still a single-screen theatre at least as late as early 1982, when the February issue of Boxoffice published a letter from David O'Meara in which he mentioned that the theater had 250 seats.

Insanely expensive ticket prices (on par with the Arclight in Hollywood), but also some of the most insanely comfortable theatre seats anywhere in Southern California.

Malibu struck me as the type of market in which a “boutique” cinema would thrive. Seemed like a pleasant enough venue. Was the later auditorium built on or was the original space split to allow for two screens?

Unless the landlord is trying otherwise, I have to think a smaller operator could come in and operate this. It was never really a popular location with large chains. The only reason Regal had it was Wallace had it, became Hollywood and sold it along with the rest of the plexes to Regal. I could see a small chain like Regency or Laemmle coming in if the landlord was motivated.

Problem with the theater was the prices, the auditorium size, and the lack of selection. If it was priced more reasonably, a lot more people from the college five minutes away would have gone to it. And the landlord literally gave as many possible chances for Regal to stay there, it just wasn’t profitable enough in the end.

A Fred Segal store is opening soon in the Malibu Cinemas' former space.