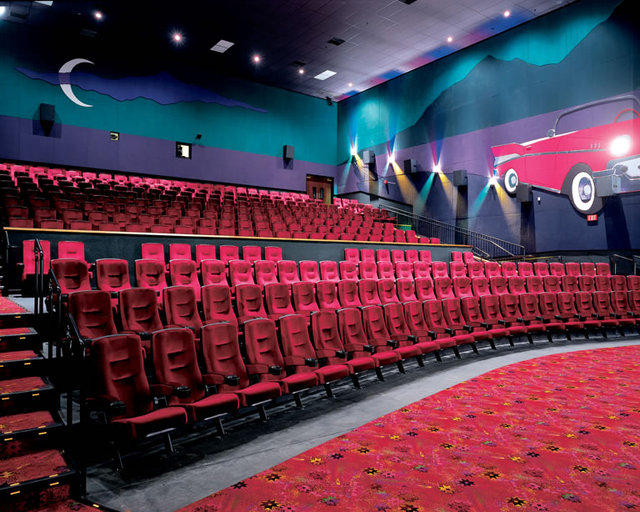 I found one, but it might be the Grand Palace in Valencia, CA. They build them all alike. I’ll keep an eye out. There was a nice B&W photo on the Flickr site, but I’ll leave that one for you.

The Edwards Grand Palace, like the rest of the “Commons at Calabasas” project, was the work of F+A Architects, and the lead designer for the project was David W. Williams. The Commons at Calabasas opened in November, 1998 (source).

At the F+A website, there is a claim that theatre’s “Italian style” facade and marquee were modeled after the opera house in Florence, Italy (which I believeis called the Teatro del Maggio Musicale Fiorentino), but I’m unable to find an exterior photo of that venerable edifice and thus am unable to determine what degree of success the architects' efforts may have had. Whatever the case, the F+A site provides a dandy (color!) photo of the facade of the Edwards, which can be found in the site’s “Projects” section, under “Commons at Calabasas”.

here is another 2008 color photo of the 6-plex cinema can be seen here:
View link

this theatre is one of the first theaters to feature ‘Auro-3D’ 11.1 sound

This theatre has always been a favorite of mine in the Valley. 2 huge auditoriums with 60 foot screens (one with Barco Auro 3d sound) and 4 nice size medium auditoriums with large screens as well. This past year I noticed every time I came here it was nearly empty. Turns out the remodeled AMC Fallbrook a few miles away with auto recliners and reserved seating has killed their business.

They are in the middle of a major renovation, adding reclining seats in all six auditoriums, reducing seating by 50%. It should be completed by November and hopefully create more traffic here. They will also have reserved seating as well. Cannot wait to check it out when done. Next time I got I will try and add pictures.

This opened on December 18th, 1998. Grand opening ad in the photo section.