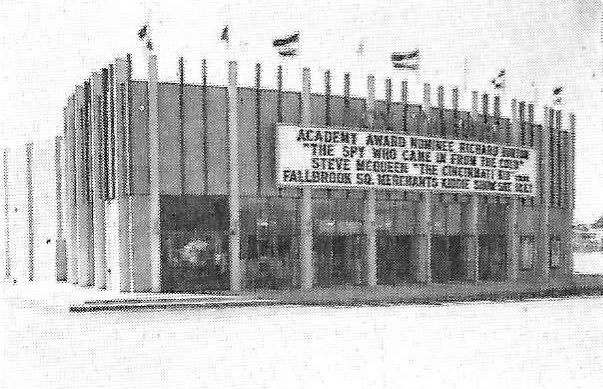 The Fox Fallbrook Theatre was opened March 16, 1966 by National General Theatres with Richard Burton in “The Spy Who Came in from the Cold”. The Fallbrook was like the smaller single story neighborhood version of of the National Theatre in Westwood.

It along with the Fox Covina Theatre, the Fox Fallbrook Theatre was twinned on April 9, 1976 and the latter triplexed (Covina). During its last years, Mann Theatres which was the last chain to operate the theatre. They would book second run films and then GCC would build a new seven-plex next door. The Fox Fallbrook Theatre, like early GCC houses, were built in part of the parking lots to malls.

The Mann Fallbrook Twin Theatre would get razed to make way for a Chucky Cheese. The theatre sat for about two years before the Chucky Cheese.

I took my parents' car for a spin in the parking lot of this theatre when I was 12. I also saw “Neverending Story” (three times) and “Amadeus” (twice) in this theatre…

I worked at the Mann Falbrook as an usher, theatre cleaner when I was 16. It was alot of fun, and was an old classy theatre.I think the managers name back then was DAN. The projectionist was a man who had to have been in his 80’s named Manny. I remember the royal red carpeting with some kind of golden swirl pattern on it as well. THe last weekend I worked there was the premiere of “Masters of the Universe” we had a packed crowd, the movie started normally and at about the 15 minute mark the picture seemed to turn upside down, it was the weirdest thing. It was some kind of defective print. So we had to refund every parfent and extremly and I mean extremly upset children. I will always cherish one of the last classy oldtime theatres.

The seven-plex William makes mention of remains open for business, under the ownership of Laemmle Theatres, showcasing both major studio and art house offerings.

I recall seeing BLACKBEARDS GHOST at this theater. I remember riding my bike from my house near platt and victory to see this film. I also recall BENJI screened there too. It was in the back of the Fallbrook Mall Near the JC Penney’s Auto Center. I dont recall this one being bought by chucky cheese but I do remember the LOWES screen in calabassas off of valley circle being down for some time as a half renovated chucky cheese.

This particular area of The San Fernando Valley is now known as the city of West Hills, CA.â€"which splintered from Canoga Park sometime in the 1990s(?).

The last movie I saw at this venue was Star Trek III: The Search For Spock; so my guess is that it was shut down in either 1984 or ‘85.

The Fallbrook reopened as a twin cinema on April 9th, 1976. Another ad posted.