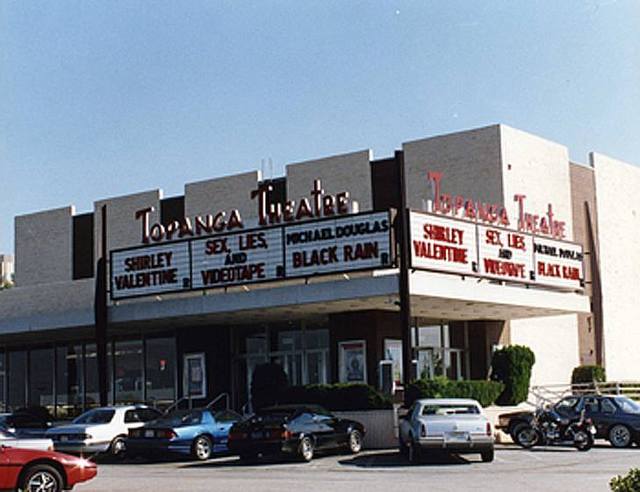 The Topanga Theatre was opened by Stanley-Warner as a single screen movie house on October 26, 1965 with a gala presentation of “The Bedford Incident” starring Richard Widmark & Sidney Poitier. It had 1,350 seats.

Pacific Theatres was the last chain to operate the Topanga Theatre, which became a second-run theatre in 1998 and closed altogether in early-2000.

What killed the Topanga Theatre was a 16 screen AMC multiplex opened one block away. In the same area there was also the GCC Woodland Hills Triplex, the UA Warner Center 6, the single screen Baronet Theatre and, down the road, the GCC Fallbrook 10.

By the time it closed, the Topanga Theatre’s 1960’s-era architecture stuck out amongst the more modern strip malls and shopping malls around it.

The former Topanga Theatre last housed a furniture store and was demolished in September 2007.

The Topanga theatre was twinned in 1972. The opening films as a twin cinema were in #1 “Skyjacked” and in #2 “Silent Running” and “The Andromeda Strain”.

Awww now bittersweet memories as I watch more and more theatres and music/book stores from our youth disappear. The Topanga theatre I first saw Raiders Of the Lost Ark in 1981; back when your parents took you to movies you didn’t even know what they were going to be about. Later remember seeing Popeye, Nightmare On Elm Street, Ferris Bueller’s Day Off, Woody Allen’s Crimes and Misdemeanors. So funny how these movie theatres are like churches or old friends. I am forever fascinated by these lost movie houses. So sad that Tower records across the street is gone as well.

I WORKED THERE IN 1982 AS A UNION PROJECTIONIST. IT WAS A TWIN USING PLATTERS. JOHN COLTRANE’S SON RAVI DID WORK THERE IN THE SNACK BAR! HE DROVE A BUG WITH RAVI ON HIS PLATE. MY DAD DIED WHILE I WAS THERE. IT WAS A NICE PLACE TO WORK.

I remember working there in 1984 and Indiana Jones and the Temple of Doom just came out. There was all this hoopla about being the first PG-13 movie and so many parents would ask us when they should shield their child’s eyes.

The other screen was showing Top Secret! and one of the trailers was for a movie called Streets of Fire where it was basically a music video for the song ‘Nowhere Fast’ and everybody used to stand up and dance to that song.

I can’t believe I remember this…. On my first day, the movies that were playing there were: in the 1st screen was “Another 48 Hours”; 2nd screen was “Days of Thunder” and 3rd screen was “Ghost”.

Being smaller than the Fallbrook 7 (at the time) and UA 6, it was hard for this theater to receive the better films once Paramount stopped working with this theater. While the other Pacific Theaters received “Dances With Wolves”, Topanga 3 received it second run….

I also remember Cocoas & Ruebins restaurants being next to the theater. The irony… I moved from CA in ‘93… I flew back 1 month ago and both the theater and restaurants were demolished….

While working at theater, we all would play basketball on Saturdays, midnight bowling and other activities. Lots of memories….

No one mentioned “Rocky Horror” that played in the latter years here. I think I saw it here twice or three times—at midnight screenings. Was sad to see it go, but it was inevitable as I worked as a manager at the nearby AMC Promenade 16. In the late 80’s and into the 90’s, I did see a few other films, including the Elvira, Mistress of the Dark campy film. I cannot remember the others I saw here, but I did enjoy this theater.

I remember trying to sit through the Kevin Smith film Dogma at this theater in 1999. Couldn’t make it through it. It was Smith’s fourth film at that point, and I just couldn’t relate to any of them. Went into the auditorium next door to watch Double Jeopardy instead, as I had already paid the price of admission. I hate to see little theaters like this go away, as every theater now is like going into a Walmart – no character or charm.

Reopened with three screens on May 20th, 1988. Another ad posted.