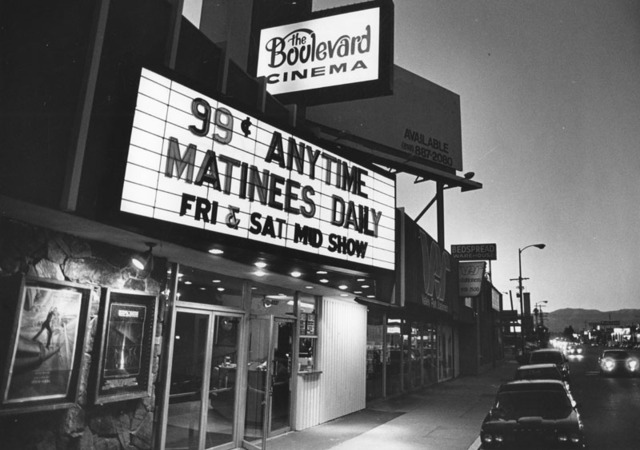 The 300-seat Valley West Theatre was opened on August 3, 1962 with Kirk Douglas in “Spartacus”. It specialised in playing art house movies. In April 1964 it was expanded to 500-seats. On November 17, 1965 it was renamed Baronet Theatre, playing “Zorba the Greek” starring Anthony Quinn. It was closed and remodeled in July 6, 1984 as the Boulevard Cinema. This small theatre ran revival movies during its final years. Located near the Topanga Theatre, the Boulevard Cinema closed in late-1986.

Most likely the luggage store now sprawls through several buildings. I noticed that in the Flickr photo you linked to there’s an arrow marked “Entrance” pointing south above the door where the theatre’s foyer once was.

Also I’m not positive about the Valley West name as an aka. Lavar reported it only as a rumor, and I haven’t found any confirmation anywhere. In the 1966 ad ken mc linked to it’s the Baronet, and as the building was built in 1961 and the place probably closed not long after August 1986, that doesn’t leave much time for the Valley West name to have been in use, if it ever was.

Ok, here is the “official scoop”. My dad owned the theatre through the late 1970’s-early 1980’s. I always thought of it as the “final era”, as it wasnt the “heyday” of the theatre, but definately a second run movie house. (the rock and roll movies and concerts, as well as re-runs of Star Wars) Back then, (amazing to anyone under 40)there were no movie theatres in the San Fernando Valley with more than one screen, until the Topanga (at Victory and Topanga) opened a second/third screen. That was the beginning of the end for small theatres like the Baronet. Eveything became multiplex corporate cinemas.

Several subsequent owners did re-name it, and the photos posted are of the same place. The address discrepancy is this: right next to the theatre was the restaurant “Two Guys from Italy”. I worked there as well for years. When the theatre closed, the restaurant did shortly thereafter. The wall was torn down, and it became one big location, as Savinar luggage.

I will never forget being a teenager, loving all of the dumpy little single screen theatres in the Valley, such as the Art Theatre (Ventura at Topanga), the Valley Circle (Valley Circle Blvd) the Holiday (Topanga) and of course the Baronet. It should be listed as such, as no one would really know or appreciate the subsequent names.

For years and years, since its opening, it was the Baronet Theatre. The address was 6937 Topanga.

Address (city) should be updated to read: Canoga Park

Function should be updated to read: Retail

I believe this was the theater I saw “Day of the Dead” and “Reanimator” at as a double feature. My friend was just getting into special effects at the time (we were in high school, and he was a very natural sculptor who could make all kinds of masks/wounds/creatures/etc.) so we wanted to see “..Dead” because a few of our friends worked on it and played zombies in it. However, the second feature, “Reanimator” proved to be the better, and more memorable, film. The funniest thing I still remember was the crowd was mostly heavy metal fans of the mid-80s at least based on their looks, long-haired and rowdy. Drunk, too, because I remember hearing many empty glass bottles rolling down the floor. Between films, they played a couple trailers, but more memorable, they played A-Ha’s ‘Take on Me.’ The parts where the singing gets high-pitched, it seemed like everyone in the theater was screaming in a sarcastic high-pitched scream. Me and my two friends were doubled over laughing so hard! Good fun!! Then, I was blown away by “Reanimator”. Will remember that night, even if it wasn’t this particular theater but the other one plex on Topanga. I am pretty sure this was the place, however…

Opened as the Valley West Theatre playing art films in 1962 with 300 seats, new architectural plans were rushed when the theatre was more successful than anticipated. It was expanded and relaunched with “Tom Jones” on April 12, 1964 to 500 seats. It relaunched on November 19, 1965 as the Baronet Theatre with “Zorba, the Greek.” It closed in 1985 and remodeled as the Boulevard Cinema as a sub-run discount house with 450 seats and one screen launching July 6, 1985 with “Shock Treatment” and “Phantom of the Paradise.”

What was its name when it closed?