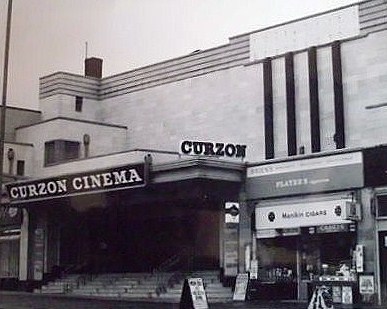 Located in the northwest London district of Colindale. Originally opened as the Odeon Theatre, it was built for and operated by Oscar Deutsch as one of his Odeon Theatres Ltd. chain. It opened on 28th January 1935 with Sydney Howard in “Girls Please!”.

Harrow based architect Arthur Percival Starkey designed this Odeon which was similar in style to previous cinemas he had been commissioned to design for the circuit. A.P. Starkey was assisted on the design by architect Frederick Adkins. It had a rather low facade that was covered in cream faiance tiles. There was a wide central recessed entrance which had shop units on each side with flats above. At the rear of the building a large car park was provided.

Inside the auditorium seating was provided in a semi-stadium plan (with no overhang on the balcony) and there were 726 seats in the stalls and 279 in the raised balcony area. Illumination was by a central laylight fitting which ran centrally the entire length of the auditorium ceiling.

The Odeon was closed by the Rank Organisation on 24th September 1960 with John Crawford in “Piccadilly Third Stop”. The building remained empty and derelict for many years.

It was re-opened by an independent operator on 13th November 1967 as the Curzon Cinema with Lee Marvin in “The Dirty Dozen”. From 2nd January 1972 it was taken over by Classic Cinemas and re-named Classic Cinema. It was twinned and one half of the balcony became the second screen from 28th January 1973. This screen became the Tatler Film Club screening uncensored sex films from 27th January 1974 until around July 1978 when it reverted back to regular films.

The Classic screens closed on 4th July 1981 with Glenn Ford in “Happy Birthday to Me” in screen 1 and Jack Palance in “The Big Boss” (“Padroni della citta, I”) and Bruce Lee in “Game of Death” in screen 2.

After laying empty for a few more years, the building was converted into the Colindale Snooker Club from 1986 which still remains open by 2018 as the Hurricane Rooms, Snooker, Pool & Bar.

I’m surprised to hear that the Tattler films were stopped in July 78, which is the month when I stopped working there.