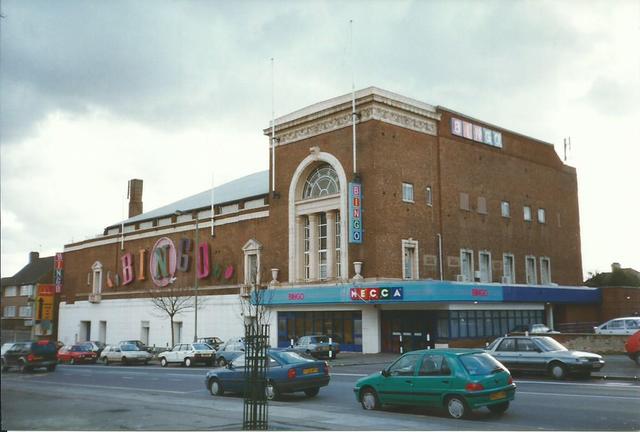 The Savoy Cinema was built for the independent circuit Goide & Glassman which was headed by A. Glassman. It was one of several large Savoy Cinemas that they built and operated in the northern edges of London, most of them were designed by architect George Coles.

This Savoy Cinema is located in Burnt Oak, a district of Edgware, Middlesex in today’s northwest Greater London. It opened on 29th June 1936 with Bobby Breen in “Rainbow on the River” and William Gargan in “Flying Hostess”. It was a very impressive cinema, designed in an Art Deco style by architect George Coles. The entrance block had Classical stone dressings surrounding a large window which was divided by stone pillars. The auditorium ran to the left of the entrance, parallel to the main Broadway. Seating was provided in stalls and balcony levels and the auditorium was equipped with a Christie 2Manual/7Ranks theatre organ which had previously been installed in the Rosevale Cinema, Partick, Glasgow, Scotland. The Savoy Cinema also had a cafe attached and played occasional variety turns on the stage to accompany the film programmes.

It was taken over by the Essoldo Cinemas chain in 1961 and re-named Essoldo Cinema but this was short lived as they closed it later that year on 14th October 1961 with Susan Hampshire in “During One Night” and Scilla Gabel “The Fruit is Ripe” (Les Filles sement le vent).

The building was converted into a bingo club, which was the first to operate in London. It continued as a Mecca Bingo Club and was a well maintained building retaining all the original decorative features. The Mecca Bingo Club was closed in October 2014 and plans were proposed to convert into flats. It sits vacant and boarded-up in October 2018.

The Savoy Cinema is a Grade II Listed building.

both dating from 1988 when used as a bingo hall.

During the late 40’s and early 50’s, I saw so many big jazz bands here, yet topping them all has to be watching Teddy Wilson’s appearance during the UK/USA non accompaniment ban the a few members of the early Trad band ignored and made up a great Benny Goodman sounding trio that had Teddy in tears and all received a standing ovation. I will never forget that moment.