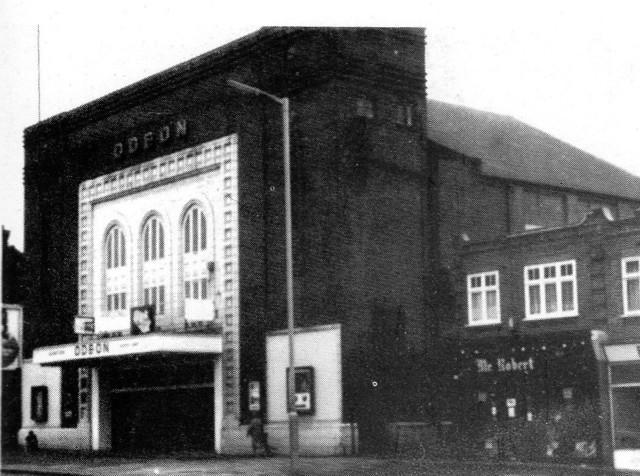 Located in the Burnt Oak district of Edgware, this cinema was positioned on the odd numbered side of the Broadway, to the north of Oakleigh Avenue. It originally opened on 25th February 1929 as the 900 seat Regent Cinema and was designed by noted cinema architect George Coles, who provided a single storey auditorium that had 900 seats.

In 1932 George Coles was again employed to re-design the building. A new facade was added as was a balcony which increased the seating capacity to 1,476, with 980 in the stalls and 496 in the balcony. The new frontage consisted of a plain brick facade which had a central feature of white stone relieved by a series of 3 arched windows over the entrance. The Regent Cinema was equipped with a Compton 2Manual/5Ranks theatre organ and there was a cafe attached.

From 16th July 1936 it was taken over by the Oscar Deutsch chain of Odeon Theatre’s Ltd. and was re-named Odeon. It was re-named Gaumont from 13th May 1950 and continued under the control of Circuits Management Association (CMA) then the Rank Organisation who re-named it Odeon Burnt Oak again from 16th December 1962.

Rank closed the Odeon on 12th February 1972 with John Cleese in “Monty Python….And Now For Something Really Different” and Anthony Quinn in “The Last Warrior”. The Odeon was demolished and an Iceland supermarket and flats were built on the site.

A vintage photograph of the Regent Cinema in 1936:
View link