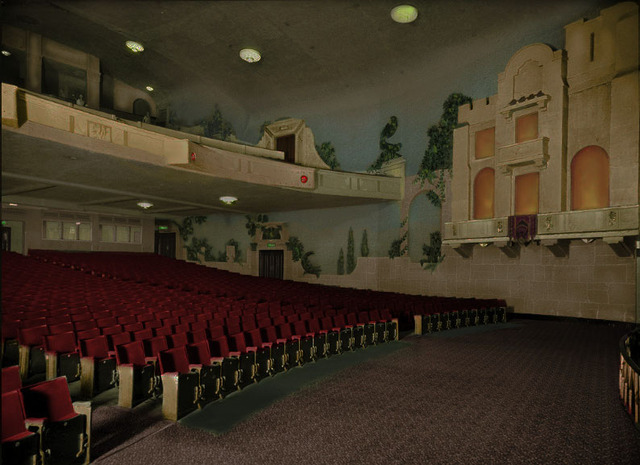 Located in Edgware, Middlesex, today a district in the north of Greater London. Opened as the Ritz Cinema, it was one of several Ritz’s built for and operated by Major W.J. King in areas located in the northern districts of London, all were designed by King himself and were immediately taken over by the Associated British Cinemas(ABC) chain.

The Ritz Cinema opened on 2nd May 1932 and was originally going to be called the Citadel Cinema. The facade was certainly designed like a fortress. Inside the auditorium, the style was Atmospheric in a Spanish garden theme with stone-clad walls and painted woodland settings. This scheme of decoration was designed by decorative artist F.L. Philie and extended from the entrance foyer, into the tea-lounge/cafe and then into the seating area. The cinema was equipped with a Compton 3Manual/6Ranks theatre organ The proscenium opening was 40feet wide and the stage was 14 feet deep. There were four dressing rooms for the variety artistes who were occasionally booked in the early years.

It was re-named ABC from 20th August 1962. It was closed for ‘modernisation’ on 3rd May 1968 and the original internal Atmospheric style decorative scheme was obliterated. The facade was rendered ‘invisble’ by covering it over in blue metal sheeting. The architect responsible for this was C. ‘Jack’ Foster. The ABC re-opened on 24th August 1968 with a reduced seating capacity of 1,785 seats, the film chosen was Audrey Hepburn in “Wait Until Dark”.

It didn’t remain a single screen for very long, as in February 1973 it closed for tripling and re-opened on 4th March 1973 with 705 seats in the former balcony (ABC 1) and two screens (ABC 2 and 3) in the former rear stalls seating 207 and 146. It was eventually re-named Cannon when that company took over the ABC chain. The Cannon closed on 8th April 1993. It re-opened under new independent management as the Belle-Vue Cinema on 16th July 1993. By the end of 2000 it had been re-named Cinemax and was screening Bollywood films, but this was not to last long as plans had been approved to re-develop the site.

The cinema operated until demolition began in December 2001 and all was gone in January 2002 to enable flats a health centre and shops to be built on the site.

A set of vintage photographs of the Ritz/ABC/Belle-Vue:
View link

My brother and I used to come to this cinema every Saturday morning for the ABC Minors in the late 1960’s. Cartoons, newsreels, a serial (I remember seeing Flash Gordon here) and a main feature. We always visited a nearby sweet shop before going in. My favourite was a small paper bag full of sherbert powder!

In 1947-8, my cousin and I were ABC Minors here. We travelled from Stanmore on the 142 bus. I remember the old arch, the coloured curtains and the organ.

I have great memories of this cinema, I saw my first ever film there which was ‘Dr. Who and The Daleks, 1965 and then used to go every Saturday morning to the ABC minors. By the 70’s went nearly every week, saw some now classic films. Wonderful times.

The text above says renamed ABC in 1962. However the cinema appears in the opening of the 1954 film ‘For Better, For Worse'and it is called ABC Ritz.

From 1962 ABC cinema had a policy in dropping the name eg Ritz and standardising to ABC for their main theatre in a town or area .