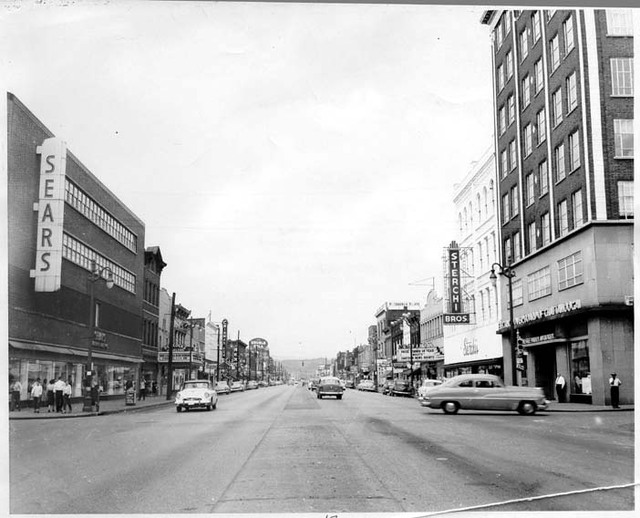 The Capitol Theatre was open in the early 40’s. Seating was listed at 622. It was located on Market Street at West Fifth Street. The theatre closed sometime in the late 60’s. The building has since been demolished.

It’s a real shame that Chattanooga has sacrificed all it’s historic buildings and landmarks for parking lots and expressways.

I recall around 1950 when the Capitol showed the Joel McCrea film, “Saddle Tramp”. They had gotten pine “saw mill slats” and decorated the ticket booth and all the outside to a rustic flavor with some props of various flavors to promote the film.
They showed a lot of B films later on.

The Capitol opened in 1940. The November 23 issue of Boxoffice Magazine said that the opening of the 600-seat house was scheduled for November 28. It was the seventh theatre in Solomon and Borisky’s Independent Theatres chain. The operators intended to present vaudeville as well as first run movies in the new theater.

In 1948, the Capitol got a new porcelain front, with poster cases and remodeled boxoffice, installed by the Milwaukee firm of Poblocki & Sons. The December 4 issue of Boxoffice published a small (very small) photo of the new front. Independent’s Brainerd Theatre got a similar front at the same time.

The April 23, 1955, Boxoffice said that Jay Solomon planned to close the Capitol for 60 days for remodeling which would include installation of a CinemaScope screen. The letting of the contract for the $85,000 project was finally announced in the October 22 issue of Boxoffice.

I worked at the Capitol Theater as an usher in 1958 for 35 cents an hour I was 14 years old.If you look close you can see the CAMEO THEATER across the street from the CAPITOL THEATER this picture is about the time I worked at the theater.The first movie after the 1955 revamp was WICHITA with Joel McCrea I cannot remember the co-feature at the time.We had SAT-SOCKHOPS it was a blast.I moved from Chattanooga in 1959