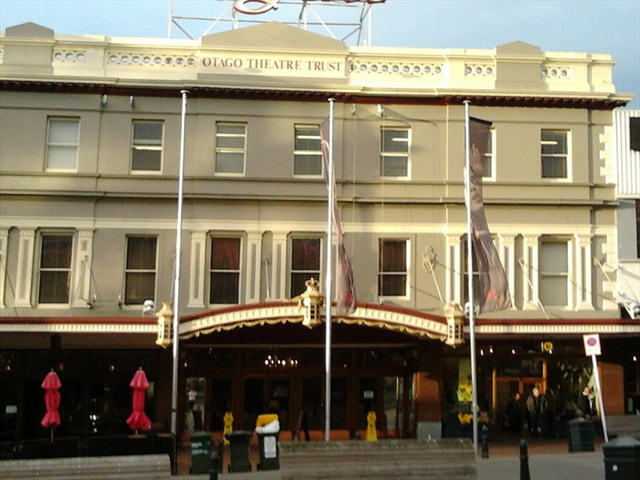 The 2,000 seat Regent Theatre was opened on 1st June 1928 with Dorothy Gish in “Madame Pompadour” and Chester Conklin in “Two Flaming Youths”. It was based on a design similar to architect Robert Atkinson’s Regent Theatre, Brighton, England(1921). It was once part of J.C. Williamson, an Australian and NZ cinema chain. In the early-1950’s it was listed as part of the Kerridge-Odeon chain. The Regent Theatre was closed as a cinema on 15th April 1974.

In near-perfect original condition and with contant maintenance, the Regent Theatre has kept its original grandeur. Now converted to live theatre with a new fly tower and dressing rooms installed in 1980, a portable screen and state of art projection equipment is still used for film festivals and premieres. The Regent Theatre was designated a Category 1 Historic Building in 1987.

This theatre is also used by the New Zealand Symphony Orchestra

Here is a photo I took of the Regent in July of 1996 on a rainy day in lovely Dunedin.