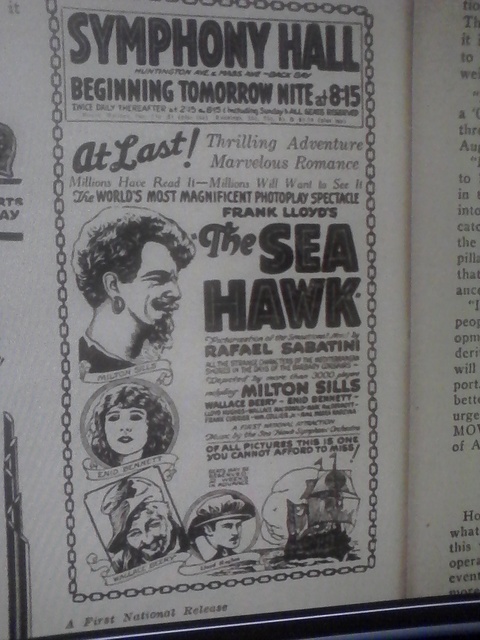 Symphony Hall was built in 1900 as a replacement for the old Boston Music Hall downtown (later reworked into the Orpheum Theatre). Its auditorium resembled that of the old Boston Music Hall: a rectangle with two shallow balconies, each with long side galleries with half-circle clerestory windows high above. Its stage, however, has a proscenium arch. It is the home of the Boston Symphony and Boston Pops orchestras, as well as a busy concert venue. It was designed by Charles Follen McKim of McKim, Mead and White. Wallace Sabine was the acoustical consultant. It opened on October 15, 1900.

“Road Show” film presentations came to Symphony Hall in early-1913. The first two movies were “The Life of Saint Patrick” and “Cleopatra”. Symphony Hall was also a venue for travelogue programs, such as those produced by Burton Holmes and Lowell Thomas. These consisted of themed movies and slides (later, in color), with a host/narrator on stage. These programs were very popular right into the 1950’s. They were similar to the travel shows on PBS-TV today.

A few years ago, during a Saturday open house, a Buster Keaton silent film comedy was shown, with organ music.

There’s nothing “rough” about Symphony Hall’s neighborhood. It is next to Northeastern University, Jordan Hall, the Christian Science Church, and other fine institutions.

Starting when I was in middle school in the early 1950s I worked at Symphony Hall as an usher, ticket-taker, and occasionally as a relief stage doorkeeper. It was a perfectly safe area then, working between 6PM and 9 PM, sometimes to 11PM. Even the side streets were safe late at night. The fans who hung out at the stage door in back were very nice people. I often walked thru the Public Garden and Boston Common late at night in those days – no problems. I had never even heard of expressions such as “mugging” and “rip off”. It all started to go to hell after 1960. The timing may have been a coincidence but, rightly or wrongly, I blamed the social decay on the JFK-LBJ years. I would never walk around late at night in this area today.

The neighborhood surrounding Symphony Hall is largely populated by students from Northeastern, Berklee, Boston Conservatory, and New England Conservatory. I’ve never seen or heard of any “social decay” anywhere near there, beyond the occasional drunk student. I’d walk there at any time of day or night.

I attend Boston Symphony concerts at Symphony Hall all the time, coming up from Providence by the MBTA. Week after week I have walked for many blocks in every direction, day and night, with no problems. I have been doing this for many years. I am a compulsive walker, and often use side streets in the area. I often walk before and after performances to or from Ruggles Station, the Massachusetts Avenue T station, at night up and down the dark walkway over the rail line between Mass Avenue and Back Bay Station, up or down Columbus Avenue. Never a problem. I do not see any social decay here or anything going to hell. Quite the contrary; I find it an exciting, lively, safe area. I’d love to live there! It reminds me of the upper West Side in Manhattan near Lincoln Center.

Gerry- yes, the area is something like a mini-upper West Side. When I used to attend performances at Lincoln Center at night I would dash rapidly thru the dark creepy streets back to my hotel. After performances at Symphony Hall you and Ron can walk all around the Fenway, Roxbury Crossing, the South End, but you won’t find me there.It may be wonderfully peaceful today, but back in the 1960s and 1970s it was a menacing dark zone full of creeps.

From Boxoffice Magazine, March 26, 1955, in an article on the history of art house exhibition in Boston:

“…Yet the history of the art picture in this city is an interesting and unique one. In 1922, during the silent days, George Kraska introduced this type of film to Boston audiences when he hired Symphony Hall and opened with a special engagement of the Russian film "Potemkim,” using the head organist of the Boston Symphony Orchestra as the accompanist.“
[Note, the year 1922 must be in error, since Eisenstein’s Potemkin was made later, in 1925. Most likely it was after December 1926 when the movie opened in New York, or else in early 1927. The article also states that later, in 1927, Kraska took over the Fine Arts Theatre, up Massachusetts Avenue a bit at Norway Street, for his programs.]
Link:
http://issuu.com/boxoffice/docs/boxoffice_032655-2
Go to page 95.

The latest version of the “All Classical Cartoon Festival” will be held at Symphony Hall on Sat Oct 23, 10AM – 4PM, featuring all Warner Brothers cartoons on the “giant screen”. The festival is a WGBH event.

Glad to hear this. I worried that this event would disappear with WCRB’s sale to WGBH.

And the “Classical Cartoon Festival” will be back again on Sat. Oct. 29, 10AM – 4PM, featuring Warner Bros. cartoons on the “giant screen”, plus live performers.

On Fri-Sat Dec. 26-27 there will be 3 showings of the movie “Home Alone” on Symphony Hall’s “big screen”. The Boston Pops orchestra will provide music for the movie. I have no idea how they plan to integrate live music from a large orchestra into this film. On Saturday Nov. 1, 2014 there will be the annual WCRB Classical Cartoon Festival, 10 AM – 4 PM, featuring Warner Brothers cartoons starring Bugs Bunny and other film luminaries.